As many of you have seen (or cared to notice), I do have an Indian Idol ad banner up. I don't usually do ads but didn't mind this time. (Gone) Although I don't even watch or care to watch American Idol, I got interested in watching Indian Idol last season. Why? What happened was I was asking about North East India to Bollywhaters and a few suggested that I start to watch Indian Idol because two of the contestants fit my North East Indian look.

Meiyang Chang - check him out here (I wish it was subtitled) 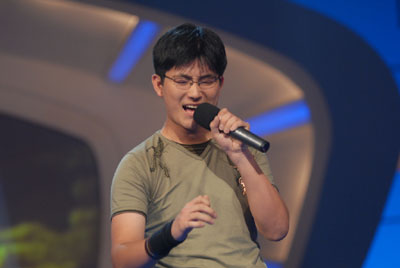 Prashant Tamang - check him out here I was sad when Meiyang left. I thought he had the best voice and was prematurely eliminated. On top of that, I've read some racism comments about him not Indian enough. But I don't want to turn this post into a debate. Just a dedication to him and Prashant.

Prashant is the other one who I was rooting for. Yep, I'm biase. Had to root for them because they were the reasons why I started to watch Indian Idol. I think both are cutie pies.

Not only that, the finale had my favorite jodi in the whole world - JoBi (John/Bipasha). I know this is going back to memory lane but Indian Idol/Sify contacted me to put their ad on my blog. I'm just disappointed that they put this on their site

Nicki
This is not related to any Indian cinema but dealing with India. Click here >>

Here is the screenshot. Or go here to view larger.

Just because I haven't written a review since Bachna Ae Haseeno (which actually was published 10/17/2008 - not even a month yet!). I started this blog off writing reviews!! I hope they change it soon cause it's misleading.

On a different note, reviews up soon!! Very soon! Yah!

O you're mentioned on Indian idol website - wow!!! Though why are they blind to your Bollywood-love? Maybe they've seen too much Allu Arjun and Siddharth on your blog? ;-)

I know, I was quite surprise. Maybe I'll watch the new season. :) I think that's what it is too. Too much Allu Arjun and Siddarth.