I have to do another set of mini-reviews.

Trust me, I've tried to do screencaps but it was taking a lot of time. During this time of the year, I am very busy with all the events at work and home. My dad is chairman of the Hmong New Years. It's in a couple of weeks! Then there's my daughter's birthday, Thanksgiving, Christmas, and New Years coming up. Hopefully I'll throw in a more detailed review soon!

Some are a few re-watches because my kids wanted to see the films, in alpha order 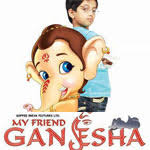 A re-watch for my daughter. She absolutely love Ganesha. Since then she read more about Ganesha on the Internet. It's about a little boy who is lonely since his parents are too busy for him. He doesn't have friends either. One day he learns that he is not alone and Ganesha can be his friend. Definitely a kids' film. Check out the trailer.

Raaz 2 aka Raaz: The Mystery Continues 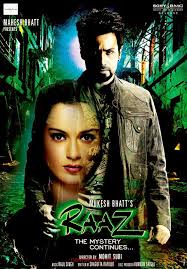 I am a huge horror/thriller fan. I kept my expectations low since I really liked Raaz (Bipasha Basu & Dino Morea). However, the film was still very disappointing. It isn't a sequel to the first part nor does it follow the same storyline. Emraan plays a guy who is a painter and for some reason paints pictures of an unknown woman (Kangana). Her world seems to be falling apart. When he finally meets her, he wonders why he has been having visions of her. The best thing about the film is the songs. They are amazing! My favorite is "Mahi Mahi" Kangana has been playing in roles that show her as a mental or unstable female. I really like her and would like her to take on other roles. She is a good actress. Emraan is underrated and should be appreciated more. The film had good potential but failed to impress me. 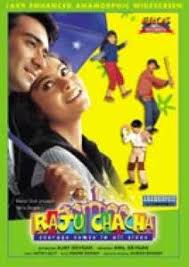 This film was my daughter's favorite growing up. She used to imitate all the dances. The little girl in the film's name is Rani and my daughter would tell us her name is Rani and made us call her Rani for the longest time, lol. Don't expect an amazing film, it isn't. For kids, it's cute. For adults, it may be a bore. At the time, Ajay spent so much money on the production and Raja Chacha was considered the most expensive Indian film made. It's about three kids who is motherless and later become orphans. The villians want the riches and properties from them. They may get it until Raju Chacha comes save the day. Kajol doesn't have a big role but she looks stunning! She plays the nanny for the three kids. "Tune Mujhe" is my favorite song but "Kahin Se Ayi Rani" is my daughter's. 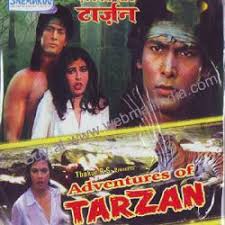 What the heck, right? The Bollywod version of Tarzan! Well, you say that now but I loooved it when I was watching it as a child. It was one Bollywood film I grew up with. It was dubbed in Hmong. I adored Kimi and wished my hair was bouncy and curly like hers. As an adult now watching it, yes, there are a lot of WTF moments. My daughter watched it with me. She looooves it. She is an animal fan and fell in love with the animals in the jungle. Come on, you know you grew up watching something of Tarzan, animated or not. Nothing new to offer on storyline. Tarzan grows up in the forest, raised by the animals, and cannot speak "human." Beautiful girl comes to forest, he gets curious. She is with a bunch of people who wants to capture Tarzan for entertainment purposes. Songs are beautiful. My fave is "Tarzan My Tarzan." 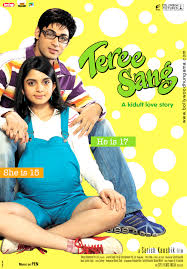 A high school love film. This is definitely the very rare type of film. Ruslaan has also played a high school guy in Mere Pehla Pehla Pyar too. I hope to see him play in more films. I have been eagerly waiting to see another release of his. Sometimes I wonder where his fate would've taken him if he actually bagged Slumdog Millionaire since obviously he is waaay hotter than Dev Patel. I've read that Teree Sang was a remake of the Hollywood movie, Juno. But I haven't seen Juno yet so I can't comment on that. Teree Sang is a story about two high school lovers -- the "rich" girl is only 15 and the "poor" guy is 17. The girl ends up getting pregnant. Now, it isn't a Kya Kehna, although I can see why some people say it is. Overall, Teree Sang is a cute film. Check out the "Rab Milya" song.
ApunBindaas Nicki at 11:10 AM

hey, thats my favorite 'silly' film. and song too. 'tarzan o my tarzan' is sung by Alisha Chinoi. :) Love it.

Wow, I had no idea that song in Alisha's first pop album -- Alisha Unleashed -- actually made it to a movie! (Or was it the other way around?) You've definitely got me curious to see it now, although I'm much more of a Jungle Book fan :)

Didn't like Raju Chacha. My Friend Ganesha sounds great. And I guess I can skip Raaz 2 altogether. Thanks, Nicki! Hope you're well.

OMG Tarzan! Cant say I want to watch it (I like the comics better) but I used to like the Alisha song too - so cheesy 80s. :-)

My Friend Ganesha sounds cute, will give it a try. And you're right about Raju Chacha - it really isnt interesting for grown ups.

My friend Ganesha really looks like a fun movie.
Tarzan, lol? Heard about it, but never saw it. Wonder where Kimi disappeared nowadays?

I bought Tarzan the other day...Lol i like that movie for all its cheesy trashiness, i'll be reviewing it sometime on my blog. I want to see Raju Chahcha as it does sound interesting.

I liked Juno but i thought it was way too overated, its a sweet film too, i guess people were raving about it because all the characters were natural and believable as well as great acting by Ellen page, Micheal Cera & the supporting cast

Darshit - isn't Tarzan a good, guilty pleasure. Alisha Chinoi is one of my fave playback singers :)

Bhargav - Yes, you must watch it!! LOL. Hmmm, Ruslaan as Bollywood's Zac Effron, good one! He's good in Teree Sang

TBF - Alisha's awesome, huh? Not sure about the time line either. You may not like Tarzan, big WTF moments, lol

Raju Chacha does have blah moments but guess it's good for the kids, hehehe. You may like Raaz 2 butI was very disappointed. Thanks for stopping by!

bollyviewer - Hahaha! The songs are amazing, but hey, you can always watch the songs on YouTube, it may make you curious enough to actually watch the film, lol.

My Friend Ganesha really is cute. Raju Chacha, it definitely is more for kids.

Kiraen Hahaha bout Tarzan, a lot of my Hmong friends want this film! It's a part of childhood cause it was dubbed in Hmong. I blogged about Kimi, will send you the link on Twitter.

bollywooddeewana - Yah!!!!!!!!! Another one for Tarzan. That's right, good cheeziness :)

I want you to see Teree Sang and compare it with Juno.

Did you know that the little boy in My Friend Ganesha is actually a little girl?

anon - yes, I knew that. Ahsaas Channa has appeared in KANK & Vaastu Shastra. Bips forthcoming film, Pankh, is rumored to be about her

Hey lady! I know what you mean about crazy times--same here! I liked your mini-reviews, though. Tere Sang sounds interesting. I'd probably like the Indian version better. LOL

Thanks, I just didn't want to ignore my blog all the way :)

Watch Teree Sang and tell me what you think :)