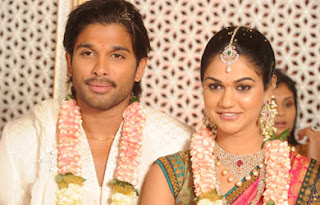 Oh yes! My fave heart throb is getting married! No sad tears for me, but tears of happiness. I only wish that I could be at the engagement. Wait...I got a few months before his actual wedding ceremony ;P

I will still be a fangirl cause I absolutely love and adore him! However, from time to time, I have to refrain myself.

Here are some videos from Bunny's engagement.


And photos from their wedding, just click on pic to see view larger. 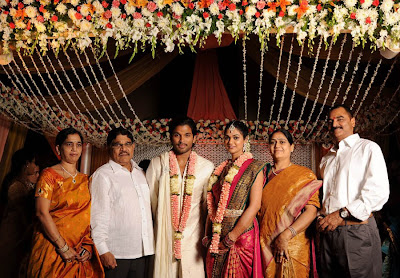 The groom & bride with their parents 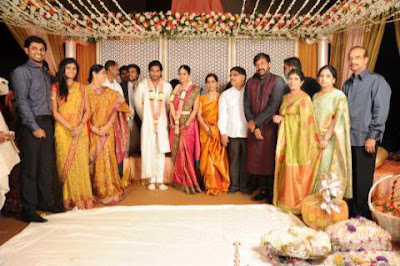 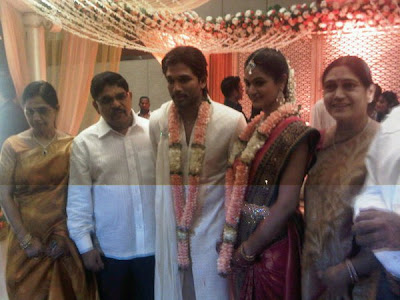 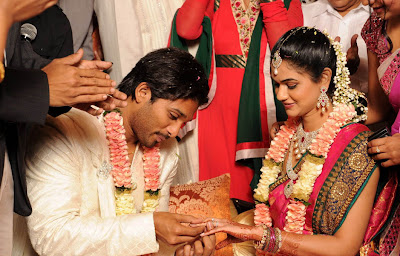 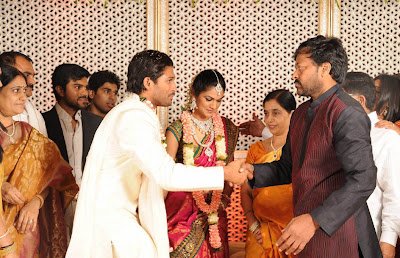 Chiranjeevi wishing the couple.
Do you see Charan & Siri too? 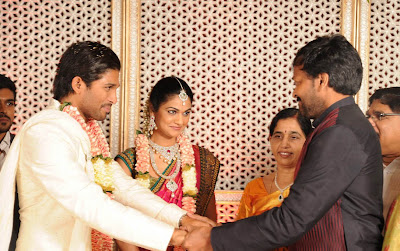 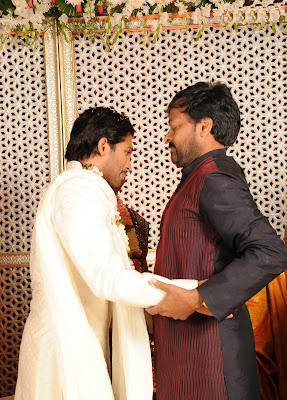 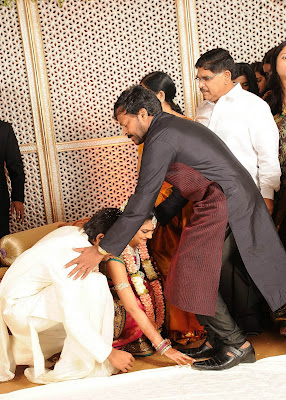 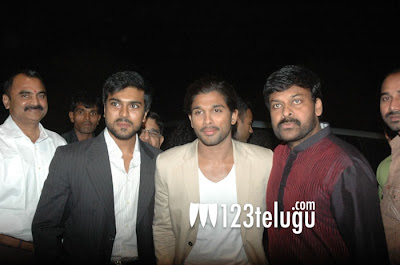 I still love you lots!

Allu Arjun's wedding is expected to be in February 2011.

Nah, not really, but kudos to the talented Louella for making this happen with her talented skills! 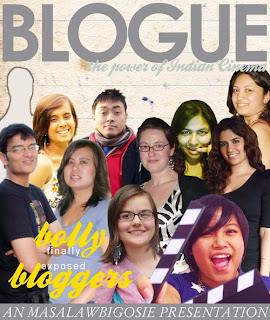 I hope you know which one I am :D
Check her page out for all the details with who's who.
I liked it so much I just had to do a blog post :)
http://masalawbigosie.blogspot.com/2010/11/here-it-shines-in-all-its-glory-bolly.html
ApunBindaas Nicki at 11:23 AM 1 comment:

Arjun - Mahesh is the Jet Li of Telugu cinema

Woah, what a long tagline for this post review of Arjun, huh?

Before I explain, let me say that the dvd quality of Arjun sucks big time. I complained before that there were no English subtitles for the dvd that I tried to watch a while back.

"...However, the dvd I bought did *not* have English subtitles!!! I am soooooooo mad!! Watched the first 15 minutes and wondering what happened to the subtitles. None! There were even menus that had the subtitles options, I made sure it was ON.....I've had this movie sitting around for the past few years, I know, it's my fault for not watching it sooner. I bought it the same time I bought Allu Arjun's other films. So mad at myself!! The dvd clearly said With English Subtitles in purple. :( Okay, just wanted to vent that. I hope to find a copy with English subtitles soon. I really want to watch more Mahesh Babu films after watching Pokiri."

I later learn from Jill about making the subtitles appear. It is tricky but I finally got it to work, using KM Player! I was soooo happy!!

But then again, I was extremely pissed off.
First of all, having this much difficulty to actually put the subs on is crazy. Then on top of that, the dvd quality sucks big time! It's very grainy and unclear. I hate the fact that I couldn't make that many screencaps like I usually do.
Second of all, I should have watched Arjun a long time ago. Not because I love the Arjun's :D but because this film is sooooo freaking awesome! While many people will say that either Pokiri or Athadu is their favorite Mahesh film. I am in the minority with Arjun being my favorite Mahesh Babu film!

As I eagerly wait for Khaaleja to release on dvd with English subs, Mahesh's last film was Athidi, which was released in 2007!! I decided to watch Arjun again, not only because it's my favorite Mahesh film but also due to the fact I have not blogged about it yet. It is listed on one of my favorite Telugu films. I will have to update soon since a few newly watched films made the list now, will have to do top 10 instead of top 5.

So why do I call Mahesh the Jet Li of Telugu cinema?
Lemme tell you. Mahesh is a bad kickass action hero. His films involve him beating up 15 rowdies with a single punch, drop kicking them with a blink of an eye, and running as fast as a speeding bullet. But through all this, never once has he extorted to being shirtless! He has always been covered up and also doesn't bare much of his biceps either.
Jet Li is also the short, fast, martial arts Hong Kong star who kick your ass and never have to rip his shirt off to do so. Interesting enough, fans have even asked him about why he hasn't been shirtless :)

So there...that's why to me, Mahesh Babu is the Telugu Jet Li.
Both are kickass action stars who don't need six pack abs or humongous biceps to show off.

Since I wasn't able to get a lot of good screencaps, I did the best I could.

Film starts off with a machete!!

And a bloody, drenched Mahesh sitting, waiting in the rain...

He is narrating what has  happened in the past (yes, with flashbacks) that lead up to the point where he's at

You have twins. A guy and a girl. Arjun and Meenakshi.

I love the sibling love, especially from Arjun for Meenakshi. He is the overprotective, loving brother.

Meenakshi loves Uday, a classmate. Arjun makes sure to unite the two of them.

Uday and Meenakshi eventually get married.
However, Uday's parents are greedy, stingy, money-hungry.
While Uday's away on business, the evil parents try to kill Meenakshi because they wanted their son to marry into a rich family instead.

Twin brother Arjun loves his sister so much he decides to visit her. Only to find out about the evil in-laws. Will he save his twin? Could he convince her that they are plotting to kill her?

The film showed a lot of the gorgeous temple

Arjun is the wonderful brother you wished you had. Plus as a lover, he'll be awesome too!
Mahesh!!!!! Mahesh Babu :)

Meenakshi is the twin sister of Arjun.
I remember first seeing the pretty Kirti in her Hindi debut, Pyaar Ishq Aur Mohabbat, with Arjun Rampal, Suniel Shetty, and Aftab Shivdasani.

Uday is the love interest of Meenakshi and very much naive and in denial that his parent are evil.
Raja looks sooo young in this film! I almost didn't recognize him. He doesn't have a big role but was good to see him after Anand.

Roopa is the gorgeous, fun girl who catches Arjun's eye.
I freaking love Shrirya Saran. She is one of my girl crushes too....so close to knocking off Bips from the list!

Songs - These caps does not even come close to how awesome the songs are!

Song #4 - "Raa Raa Raa"
Arjun teasing Roopa
Really cute song to watch and I didn't do a good job capturing it cause of the awful dvd quality :(

Many people will debate with me on this. I think Mahesh and Shriya make the best jodi. I love their fun, playful, comical scenes together. I want them to be in another film together!

One of my favorite scenes from the film...when Arjun follows Roopa and her dad around the temple :)

Again, cannot stress how much I love the sibling love in the film! Especially from a brother to a sister!

Main reason why I love Arjun is the masala flavor.
So yes, you miss masala?
Watch Arjun.
Come on. You got Mahesh, Shriya, Kiri, Raja, Prakash. Great songs.
What else do you want?
I know! A better dvd quality film with working subtitles! :D