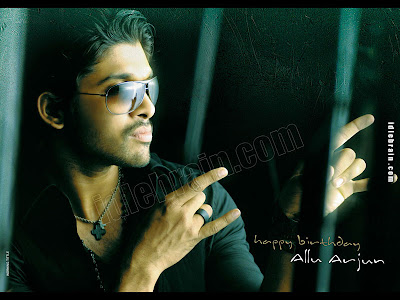 My hottie's birthday was yesterday, April 8th. I've been so busy that I didn't have time to do a good post on his birthday. Gosh, I feel really bad.
I have been working on pictures and animations from his films but not quite finish yet. But I did change my header this morning.
Besides waiting for the Parugu dvd for soooo long, Bunny's next film is Aarya 2. His film Aarya was a big hit so there is going to be a sequel.
So far, I have reviewed on this blog, all his films except his debut film Gangotri, - my goal is to that right after I finish up with the Happy Days review (so long in the process, so sorry!)
For those who don't know him, check out all the caps I made of him. He's not known for his acting but his good looks and dancing. I think he can overtop Hrithik and Shahid anyday in dancing.
He's the reason why I got interested in South Indian films in the first place.
Aarya (2004)
Bunny (2005)
Happy (2006)
Desamuduru (2007)
I thought about taking a role in South Indian films since most actresses are dubbed anyways, lol. But until then, I have to stay on top of my studies.
ApunBindaas Nicki at 10:09 AM

So far, I've watched only one of his movies, Happy(which I LOVED!). I might have to give either Bunny or Desamuduru a look-see.

You really want to act in movies?

Bhargav - hahaha, that was just me being silly since A LOT of South Indian actresses are dubbed. :D

LOL! But you could still give it a shot! When are you returning to our good old Bollywood?

Bhargav - Hahaha, I can't act. LOL. Maybe I'll have a non-speaking part since I can't dance either.

Bollywood? Not even sure anymore. :(

and yeah,,
KooooooooL Header. Loved it.

Darshit - oh no. I'll be back with Bollywood, just not sure when.

Hai BUNNY!! This is chandrisha from vijayawada…………..MANY MANY HAPPY RETURNS OF THE DAY………….May be my wishes are not so special for you………But you are very special for me………….Here’s a small gift for u …………….Hope you see it and enjoy……….http://www.youtube.com/watch?v=hOn6MhGuqzI
contact me at:chandusnm@yahoo.com
Happy birthday once again You rock forever…..(especially YOU ROCK MY WORLD)……….
With lots of love ……………
FEEL MY LOVE……….
CHANDRISHA…………..