Classmates - Telugu flop but I loved it 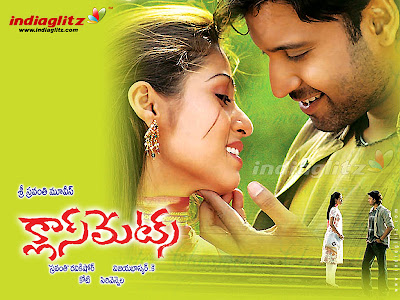 However, sadly, Classmates did not do very well in Tollywood. Regardless of box office status, Classmates has a good script.

Don't let the wallpapers and movie stills mislead you into thinking you're going to be watching a bunch of college students and their lives. This is no Happy Days.

Classmates is about a 10-years reunion in the city of Warangal, to pay respect to a former classmate, Murali (Sharwanand). However, when the students all re-unite again, Ravi (Sumanth) is found strangled in his room. Did he tried to commit suicide? Or did someone tried to kill him? Did someone have a 10-years-old grudge on Ravi?

The film took me by surprise because it ended up as a thriller. What I liked most about it is that it is very unpredictable. There were different sides of the stories from past and present and why they came to the reunion.

Professor Chandra Mohan is retiring from teaching. He wanted to see all the former classmates at the 10-years reunion, which was very important to him because his son, Murali, was a part of that class.

Everyone gathering together paying respect to Murali.

Murali was definitely a great guy at school who everyone loved.

The night ended with an attempted suicide by Ravi. Or did someone try to murder him?

Ravi is a rebel. Some may think he's a rowdy, but he has a strong-minded will when he believes in something.

Sumanth is a good actor. He's impressed me with the films I've seen of him.

Badu, Ravi's best friend in college, tells his side of the story of Ravi and him during college, why someone would hold a grudge against Ravi.

Badu is the kind of best friend a guy would want. He's loyal, funny, and just plain cool to hang out with. After college, he is a loving family man.

Sunil did a good job. Even though he just had a supporting role, I like comedic touch to a more serious BFF.

Satish is Ravi's biggest rival in college. Everyone knows that. Satish and Ravi were on opposing political teams. Satish even got Ravi's girlfriend, Raaji, against him. But did Satish hate Ravi that much to want him dead?

Ravi Varma -- funny, since Ravi is his real name -- was good. He has the "evil" expressional eyes and smile.

Raaji was Ravi's love in college. However, they fell apart by Satish's selfish schemes. Raaji misunderstood and misjudged Ravi, which hurt him a lot.

Did she hold a grudge against Ravi all these years? Enough to have him dead?

Sada is really cute. Interesting, I've never seen a film of hers but the week of my handicapness, I was able to see three films of hers (plan to review them all) -- Classmates, Anniyan, Unnale Unnale.

Murali is loved by everyone at college because he is just sweet to everyone. His father is a professor at the same college. Music is his passion and sings at events. He has a crush on Razia.

But tragedy hits and Murali is no more. Because he was so loved by everyone, his death affected a few who could not overcome it.

Sharwanand looks really young compared to his Gamyam film. Even though Gamyam released a year later, still...I am still amazed how young he looks in Classmates. His role was short compared to the other few but very significant.

Razia is considered an outsider, an outcast. She usually shuts herself from everyone else. One person who fell in love with Razia is Murali.

No doubt that Kamalinee Mukherjee is the reason why I watched Classmates. Admittedly, I was a bit disappointed that her role was not as lengthly and not a "lead" role. But after watching the film, I was not disappointed at all. I swear Kamalinee NEVER disappointed me at all in any films I've seen of hers.

There has already been the death of the beloved Murali, will there be another one?

Until Ravi gains consciousness, will we find out?

Police investigates to see if it was a suicide or murder.

The songs just something extra to an already good plot. Favorite song is definitely "Gunde Chatuga Inninalluga," which is played twice in the film.

Because I mainly watched this film for Kamalinee Mukherjee, made a few more caps of her. And without the black veil.

Just finishing up this review, I don't understand what didn't click in Tollywood because in Malayalam, it was a huge hit.

Just for fun, I have lots of pics for memory and decided to pull out my Classmates days.

Except I have the older pics on the top and the more recent ones of me on the bottom :) Hairstyle change, huh? You really don't know, I have more hairstyle and hair color changes than all my friends, hahaha. I do miss the thinner me though.

Definitely worth a watch. If you seen the original Kannada version, then this may not do anything for you. But sometimes that doesn't matter. I've watched frame-by-frame remakes before - Ayutha Ezhuthu vs Yuva.

Give Classmates a watch. I enjoyed it a lot!

Never heard of this movie. Looking at the title i definitely would have thought that it is some kind of college rom com. I guess it has been pretty successful slipping under the radar due to the lack of promotion.
The plot sounds very unusual and interesting. I guess it goes without saying because kamalinee & Sada(two of the finest actresses) are in it.
Btw, speaking of Sada, you should check out her debut movie Jayam(telugu). She was wonderful in it. The songs were damn good too. It was later remade in tamil with the same name, but i haven't seen it.

Oh by the way, the addition of college pics at the end of this post is a nice thematic touch. Looks like you definitely are more adventurous with your hairstyles. I like your current hairstyle compared to the ones during college days.

actually it's a remake of a malayalam movie.Not kannada.i don't know whether there is a kannada one,but the original is in malayalam(starring prithviraj and narein).its one of the biggest hit in malayalm.

I got malayalam version to watch, I'll think about remakes later.
Flop? sumanth is not a sucessful hero, I don't know about acting - Sathyam is waiting.

I prefer the way you look now, but you were a college cutie! ;-) This movie looks like fun. Sunil is the only Southie comedian I've enjoyed so far... And isn't Ravi one of Sid's friends in Bommarillu? Anyway, I'll have to see if I can find it.

This looks so cute!!

Thank you for reviewing this one - I will have to add it to my list.

Kiran - I know! Maybe it was the low publicity that got it a flop status? Will definitely check out Jayam. Oh yes, the pics makes the film look like a love story set during college but it sure isn't :)

AP - You are so right! Thanks. for the correction, will change.

imienazwisko - I like Sumanth, but hey, Abhishek was a flop hero too earlier in his career :)

ajnabi - Hahaha, thanks! I rather have my "classmate college" look though. You know, I had to look up Ravi and you're right, he's in Bommarillu, as long as other films that I've seen, gosh, I sure didn't recognize him!

Filmi Girl - Thanks so much! Hope you can find a copy and watch it.

Ahh so cute, What an evolution of hairstyles you've been through,I'm loving the new hair