Kaalpurush - Bengali film, I've been looking for and found on Induna 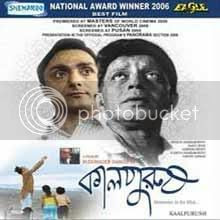 Kaalpurush was released in 2005 and won the National Award for Best Film. However, it took several years for this film to be released officially on dvd. I've been looking for it everywhere. Thank goodness I found it on Induna, which I blogged about.

Bengali films are more serious and arty than other Indian cinema that I've seen. Or so it seems like. Even though I bought Kaalpurush several months ago, I didn't watch it right away. I wanted to be in the right mindset to watch, what I mean is be in the right mood to watch it, even though I have been wanting to see it for a while. I don't watch many Bengali films. It's already hard enough for me to find Tamil and Telugu films, imagine me trying to get Bengali films! 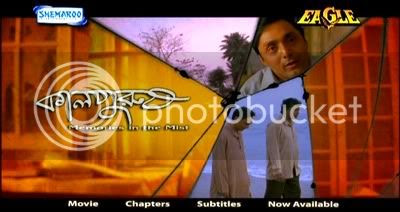 After watching it the first time, I wasn't sure whether or not to like it. The film definitely has a good,  meaningful storyline. Yet, the pace was very slow. The performances are top-notch, don't get me wrong. Kaalpurush is just one of those films that you will appreciate for its storyline, but cannot watch over and over again. I wanted to like it more, so I gave it a second viewing. 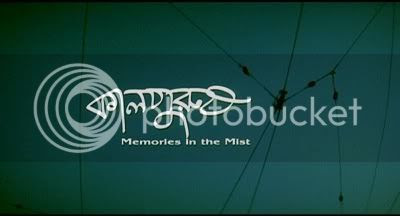 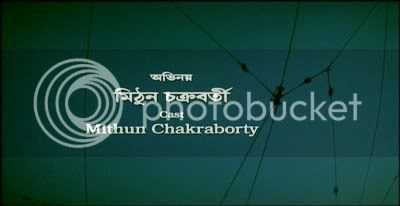 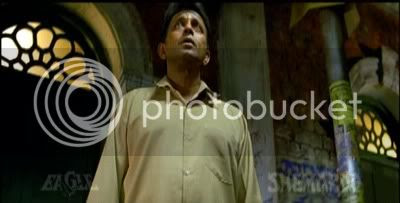 From the beginning of the film, he is shown watching over his son Sumonto (Rahul Bose) and his family.

He really wants to talk to Sumonto but is afraid. He hasn't seen him in so many years after the misunderstanding and miscommunication of what happened in the past. 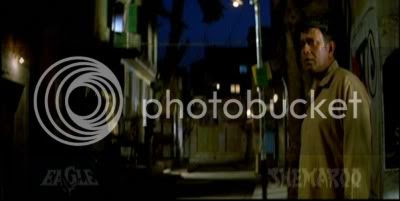 I'm a bit biase because I adore Mithin and watched his earlier films. However, I'm used to watching his masala-filled Bollywood films and have never seen him in anything "serious." Therefore, I was very excited to watch him. 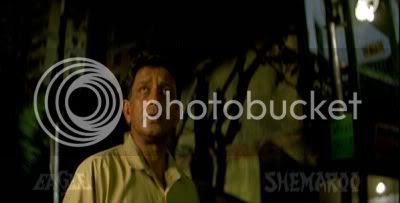 It was very endearing to see an older Mithun in a fatherly role. In his recent Bollywood roles, he usually plays a villian and/or just in a supporting cast. Arguably, one can say he also has a supporting role in Kaalpurush, as well. However, his character is one of the main focus of the film. 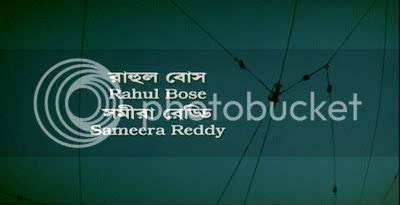 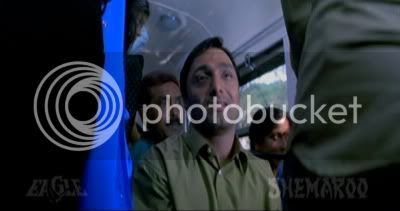 Sumonto (Rahul Bose) is in a loveless marriage with Supriya (Sameera Reddy) and their two children. On top of that, he has a dead-end job. He often wonders about his father (Mithin Chakraborty) who he used to adore. 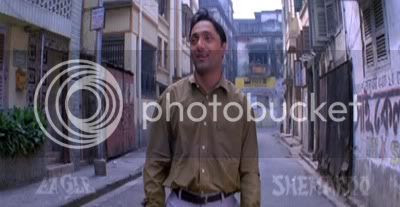 Rahul Bose is one of my inexplicable crushes. I've often wondered why he isn't as well-known in Bollywood, but I've learn that he steers away from masala-type of films. The few Bollywood films that he's been in, I enjoyed watching him. His acting is amazing and is no different in Kaalpurush. I mainly watched the film for Sameera and was stoked Rahul was opposite her. A lot of people have praised Sameera in her role but it was Rahul who carried the film. 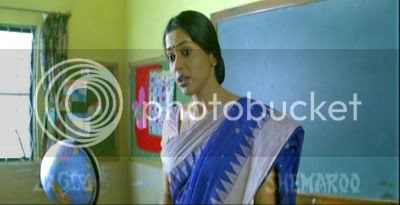 Supriya (Sameera Reddy) is married to Sumonto (Rahul Bose) and a school teacher. She is definitely a high achiever and wants to better herself, even if that means ignoring her husband and children. As I mentioned before, I mainly wanted to watch Kaalpurush for Sameera. I've heard nothing but great things about Sameera's performance. Although I do think it is Sameera's best acting till date, Kaalpursh is still Rahul Bose's film all the way. Playing the cold, emotionless woman, Sameera took it to another level from her glamorous, dolled-up looks in Bollywood. 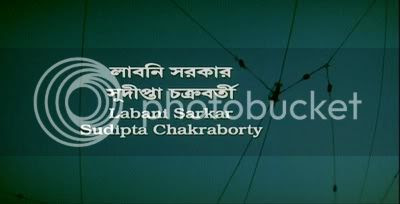 Putul knew about her husband's ex-lover, but he chose to marry her instead. Little did she know that she will finally get to meet her one day.

Laboni Sarkar is just so motherly. I don't even know if that is a good ajective but I just love her look. As a wife and mother, I do know how she would feel if I was in her position to ever face the "other" woman who you know your husband was so deeply, madly in love with. She doesn't have a big role but was a pleasure to see her. 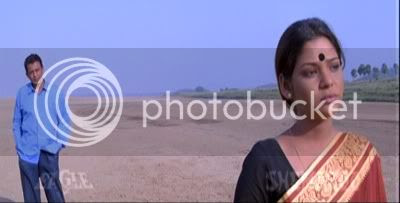 Everyone wants to hate the "other" woman, the ex-flame. But can you really fault her for wondering why the man-of-your-dreams just simply left and went away without you knowing? She got the chance to see him again and talk it out.

Sudipta Chakraborty is beautiful. Why did the "other" woman have to be so gorgeous? Me thinks just for insecurity purposes. Just like Laboni, Sudipta doesn't have a huge role either.

So you think you know the rest of the story? I'll leave it at that. Don't wanna spoil anything. The flashbacks show little Sumonto and his parents. 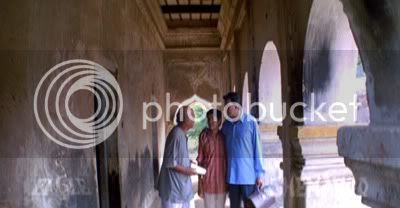 Little Sumonto used to accompany his father when he's out with his patients. Yes, his father was a doctor. Of course, something dramatic happened causing Sumonto and his father not to talk anymore.

Many years will pass, Sumunto and his father, Ashwini, will finally meet again, discussing what happened, how they are doing. 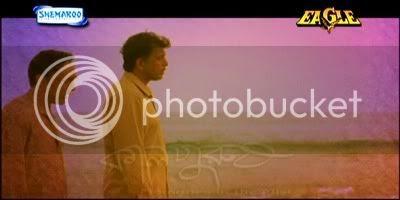 Will it be too late?

The strongest relationship in the film is definitely between Sumonto and his kids. He loves his kids so much. One of my favorite scene is when his daughter is drawing on his back, while he is holding his son on the bed. 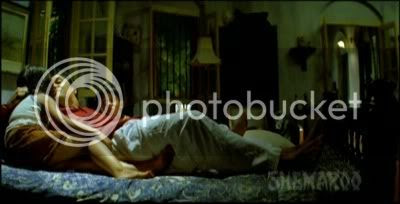 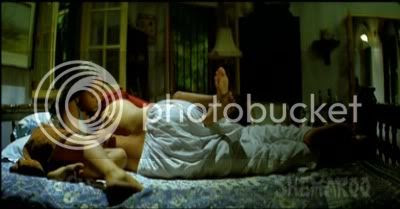 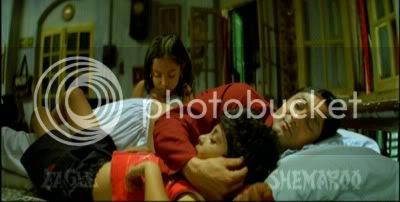 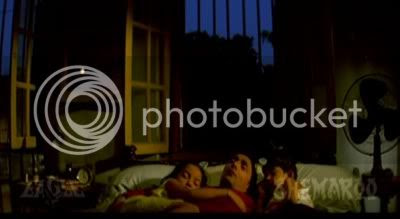 Even though there was a brief cooking scene, I captured it. I mentioned in my Punnagai Desam review, how rare it is for me to see this in Indian cinema. 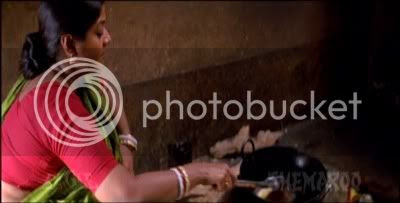 I thank Eagle & Shemaroo for finally getting Kaalpurush out on dvd. 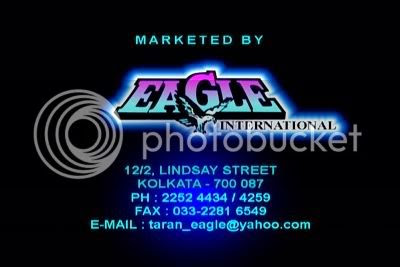 However, must you put BOTH of the logos throughout the film? 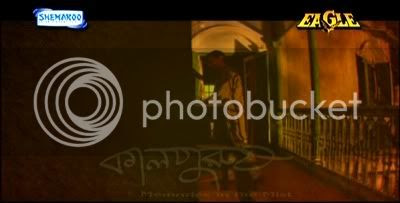 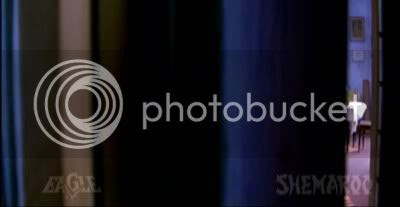 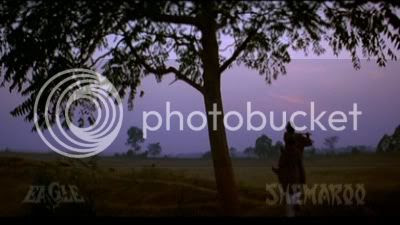 Another complaint I have with the dvd is the poor quality and dark visual look. 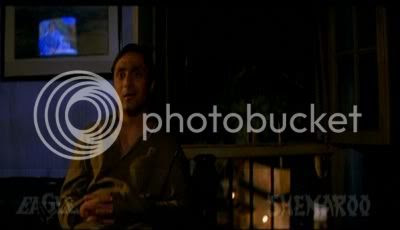 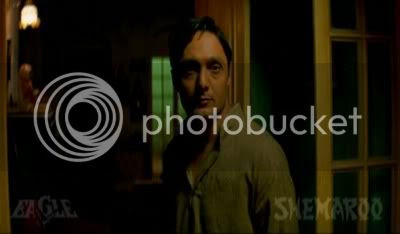 After watching Kaalpurush more than once, did I like it? Yes and no. It may not appeal to a lot of people. However, it is worth a watch for the storyline and acting. Even though it is very slow-paced, there are several arty symbolic signs shown throughout the film. Definitely, it will be appreciated to film critics who want to look more pass masala-type of films. 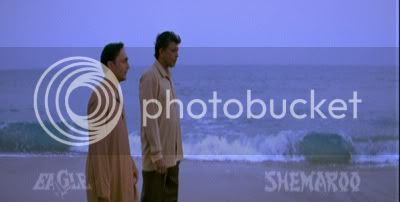 Rahul Bose is a very good actor. Loved him in Mr & Mrs Iyer and Chameli.
But Mithun & Sameera Reddy in a Bengali National Award winning film? Never expected that. I just realized how funny it is that Bengali Girl Kamalinee is acting in Telugu movies while Telugu Girl Sameera Reddy is acting in Bengali movies :-)

I've been wondering whether to watch this one or not. Mithun in parallel cinema mode is really good (his first Hindi film Migaya won him a national award, too), but the summary on wikipedia (full of spoilers, by the way) makes the film sound like its too artsy for me. You make it sound interesting. So maybe I'll give it a try after all!

Thanks for a good review and screencaps as usual.

Mithun was awesome in his first national award winning movie "Mrigyaa". Nothing of the disco dancer he was to become later. A serious role of a tribal in the colonial days - he was simply too good.

U r very right - bengali films tend to be a bit slow. A recent good one of Rahul Bose is "Anuranan"

Thanks for the review! What did you think of the "sound" of spoken Bengali? I always say that it reminds me of a cross between Chinese and Hindi, with all the "sh" sounds and other linguistic terms I don't know the name of. :) I didn't realize it would sound so unique- it's very easy to recognize Bengali once you listen to it for a while.

bollyviewer - Wow, I have to watch Migaya!!! That is a must. Gosh, I hate when Wikipedia put so many spoilers!! Why? I know you like Bengali films and you may like this one!

Filmbuff - Aaaw, thanks so much!! Wow, another rec for Migaya, I have to watch it now.

I have Anuranan somewhere. Thanks for reminding me about it!

MinaiMinai - Hey there! You're very welcome. Hmmm, I have to listen to the Bengali language again. It reminds me more of Hindi. But a cross between Chinese and Hindi? Definitely have to listen more to it.

I really want to see more Rahul Bose but I honestly don't know if I can stand those logos on *everything.* It's so distracting and pointless!

Filmbuff: I saw the train scene on youtube. Very cute.
Nicki: Sameera has acted in a telugu movie "Jai Chiranjeeva" opposite you-know-who :-)

Ajnabi - best Rahul Bose movies are "Mr & Mrs Iyer" (English), Anuranan (Bengali) and Pyaar Mein Twist (Hindi - hope i am right about the title - with Malika Sherawat who has a good role too)

Hi Nicki..
M so glad you r followin my blog.
I'm gonna post an article on bollywood movies soon. I hope you like it..