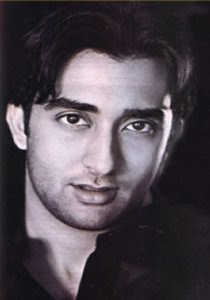 Not many people really paid much attention to my favorite Khanna until the Twitter world. He makes cute, witty tweets that makes you just wanna fall in love him even more :)

Before sources were available on the Internet and even online streaming, I used to have my Desi dose every Saturday mornings watching AVS TV.

That's when and how I discovered the adorable, cutie Rahul Khanna so many years ago.

A lot of people knew about his famous father, Vinod, and younger brother, Akshaye, due to their activeness in films.

I absolutely adore Rahul Khanna since back in the days. Even when he's in supporting roles like Love Aaj Kaal and Wake Up Sid, he still has a special place in my dil :)

Picking out a film for Rahul to start with was a bit difficult for me. Although Rahul is too irresitible in Love Aaj Kaal and Wake Up Sid, I didn't want to choose them because I wanted people to see his other films too. Therefore, I chose Raqeeb and plan to review Bollywood/Hollywood too.

Raqeeb is an Urdu word for "Rival."

The film is about three guys who are in love with one woman.

Rahul Khanna - I couldn't resist getting caps of Rahul smiling. I love his smile!!!

Meet Bachelor #2 - Siddharth
He works with Remo and is his sidekick. Why is he only second best?

Sharman Joshi - underrated actor who should be cast more in films! A few films which I loved him in - Golmaal, Life in a Metro, Rang De Basanti...
He looks so much like Saif Ali Khan, to me.

Meet Bachelor #3 - Sunny
He is a struggling actor trying to get a gig.

Jimmy Shergill - another underrated actor who should be cast more in films too! A few films which I loved him in - Maachis, Munna Bhai M.B.B.S., Strangers...

Meet the apple of the three guys' eyes, Sophie.
She is gorgeous and make the mean weak.

Overall, the OST is not that great. The song, "Jaane Kaise" is my favorite to listen and watch (hello, Rahul!)

Part of Raqeeb was filmed in Pucket, Thailand. Check out the background dancers to the above song, "Tumse Hi Chalti Hai" and the following still

Tanushree's makeup really bothered me. She is a beautiful woman but was caked on with tons and tons of eyeliner, eyeshadow, mascara, lipstick, blush, you name it

Remo had a couple of flipping action scenes, I had a hard time capturing one of them and could only get one still

Because it's Khanna-O-Rama week, more caps of the the adorable Khanna

The film starts off slowly but quickly turned out to be a thriller. Because it's a thriller, what does that mean? Someone is going to die? Someone is plotting against someone else? Watch it!

Overall, Raqeeb is not a must-watch film, but it's worth watching at least once. I love thrillers and enjoyed it for the second half.

Rahul is the main reason for the film to work for his natural acting. Sharman was a pleasure to see but was overshadowed by Rahul. Jimmy is a good actor but don't get enough props and was kinda wasted in this film. Tanushree has the looks and does decent in her part.

Rahul really started looking good, the moment he chopped off his hair! :-) And I hope he gets the girl at least once in a film. Did he get her, here?

Look at that boy--so cute! (And Jimmy with the emo hair--huh?) I've never heard of this before but it looks like a decent timepass.

bollyviewer - you want me to spoil it? Email me :)

ajnabi - it definitely is a decent timepass :D