This week is Govinda (Chichi) week, delcared by Kay. I told her that I've already done some Govinda reviews already (just checked, done 8 of them, yes, eight) so she suggested I do a recap of them. I will have to dig through my dvds to see what other films I could review, definitely his older stuff.

Govinda was the first Bollywood actor who I thought was good-looking and could bust-a-move. He is such a ray-of-light with his burst of energy. Becoming such a big fan of his, I saw most of his films on vcd with*out* subs in the late 80s and early 90s. I remember the guy at the Desi store looking through the book he's writen at all the films that I rented and saying to me, "you're a Govinda fan!" Indeed, I am.

I ain't gonna lie. Towards the mid 90s, Govinda started to do films that I didn't care for anymore. Maybe a lot of it had to do with him not being paired with Neelam? Govinda-Neelam are my favorite dancing jodi. Both were the only ones during that time who complimented each other. They were the only modern dancing jodi at that time. There were stars that could dance well traditionally or classically but not with the modern beats :)

Check out this old Filmfare cover of them. 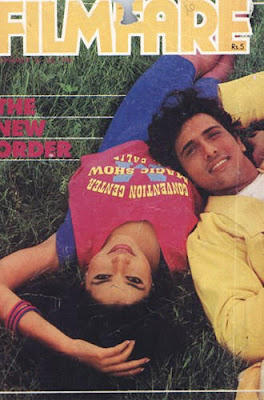 Aaawwww, I love them together. (I posted this pic on my Taaqatwar review)

Do check out my other Govinda posts I've done in the past (all listed below with links). Again, I will find another Govinda film to review and go through. Just cause it's Govinda week :)

Dariya Dil
Govinda as Superman? Nah, but do check it out.

Govinda looks sad, go watch it for him :)

Ilzaam
Govinda's first film with Neelam and my first film of his. He blew me away dancing away in the "Street Dancer" song (a must-watch too!)

I freaking adore this jodi!

Love 86
A cute romantic film with Govinda-Neelam. Very typical but it's them who make it work. They share onscreen time with the other two jodis in the film, Rohan Kapoor-Farah, and totally overshadowed them. The soundtrack is one my all-time favorite "oldies."

Aaawww, worth it, huh?

Farz Ki Jung
Besides Govinda being a reason to watch this film, another reason to watch is Neelam with her kickass action beating up goons. The songs are really good. Just go watch it :)

Sindoor
So there's the Govinda-Neelam jodi in this film, what else to make you wanna watch it? How about Shashi Kapoor, Jaya Pradha, Rishi Kapoor, Jeetendra. The star cast alone is enough :)

One of my favorite stills of Govinda

Khudgarz
Besides the huge star cast - Jeetendra, Shatrughan Singha, Bhanupriya, Amrita Singh, Govinda, Neelam, Saeed Jaffrey, Kader Khan, Sushma Sen - in the film, another reason to watch is the great family relationship that was portrayed in this film. Govinda-Neelam are not the main focus but when they come on screen, it is magic.

Taaqatwar
David Dhawan's directorial debut film. With the one and only Govinda! It's a fun film about revenge. Definitely masala. Oh yeah, Neelam don't play either! And what I mean by that is she kick ass too!

In the end, I still do adore him. He still got it. For those who saw Salaam-E-Ishq and loved his performance, go watch his older films. You will then understand my love for him :) and will love him even more.

More to come soon. I promise.
ApunBindaas Nicki at 1:12 PM

Aiyyo... I tried, Nicki, I tried to convince myself to watch him, but even though I did love his role in SEI, I really can't imagine ever being interested in Govinda... Sigh... Maybe one day when I run out of all the cool new guys, and when I also get through all of Rishi's movies I want to see, and then Guru Dutt, and then Chiru, and whoever else from the olden days I keep meaning to see more of, maybe, maybe I'll give Govinda a try. And when that happens, it will be all because of you, because your enthusiasm is the only thing that makes him seem interesting (then again, if I think about the last actor I said that about... Haha! Now THAT was a nice lesson in "never say never" :D). God, this Bolly universe just never ends!...

Just Love Govinda - Yes he did loose his charm when he started repeating his comedy act. Wish Raavan does the miracle - keeping fingers crossed. Love u for posting such old pictures

Nice write-up Nicki. I love his dancing and I really like Neelam so I will be watching his films. I look forward to reading the rest of your post.

Lovely, i was about to write up Hatya for my own post on Govinda but your review is fab so i won't bother writing it up again, i just loved the songs in that film so much. And i agree with you, i love his 80's films the most, i feel a lot of his 90's stuff are way too loud for my liking

Dolce - hahaha! yeah, don't say that cause you said that about Allu Arjut...then now, look at you thinking Ranbir is hot. Next thing you know, you will be watching Govinda films! I just know it. :) And you are still blaming me? :D

Yoyo - thanks for visiting my blog. I totally agree!!! Govinda has that charm that I love. I think he will rock in Raavan just like he did in SEI

bollywooddeewana - You should still write up Hatya :) You're a wonderful blogger. The early 90s films of Govinda were not bad. It was just when he started to be paired up with Raveena & Karisma, those films were not that good

I STILL havent been able to watch Love 86! I love the songs and the general happiness in the movie, so hope springs eternal- one day I will! Love Hatya and Khudgarz- the latter can stand multiple watches- its just so much fun. And I'll finally admit, Dariya Dil is a guilty pleasure. And in his new stuff, I rather like him in partner and Salaam-e-Ishq. Honestly, the only reason Im interested in watching the new Raavan is because Govinda has a bit part in it.

Shweta - what's taking you sooo long? Come on now :) Please do watch it. I know you will love it like me :) I am so looking forward to Raavan for Govinda too

Well done! SO many movies, so little time, because I'm so busy watching movies. Note to self: Get real life too. :)
All the best!
Sita-ji

All right, all right, so he was one of the best things about Raavan, I admit defeat and I bow to your wisdom. But I still think he was so great in Raavan mostly because there were so many things that s**ked about the movie overall, so the good stuff really stood out :P

Dolce - lol, at least you acknowledge the great powers of Govinda. I must force you watch his older films, so you can fall in love with his charm and dancing:D