Since I haven’t really been “reviewing” and more fantasy casting for Bunny-Cherry remakes wish, I thought I would blog about the four horror films I saw a few weeks ago.

For those who know me, I’m a huuuuuge horror fan. I love it. I don’t get scared easily. Maybe because I’ve watched so many that I could predict the storyline and/or what is coming up. I watch a lot of Asian (Thai, Hong Kong, Japanese, Korean, Filipino) horrors.

The horror genre is not popular in Indian cinema. There have been a few films released throughout the years but many fail at the box office.

The following are the few that I've watched 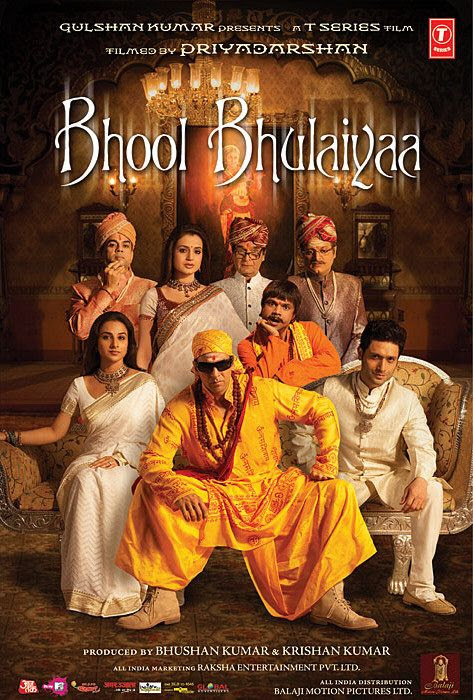 Rumors of an ancestral palace located in a small village that is believed to be haunted by a ghost. Original storyline is from the Malayalam film, Manichitrathazhu. It has also been remade in Tamil as Chandramukhi. Bhool Bhulaiyaa is just the Hindi version. I haven’t seen either prior versions before, but overall, I did enjoy it. However, I did have one minor problem. Since Bhool Bhulaiyaa is a horror film, I didn’t like the comedy parts thrown in. I know I like masala films but not in horror films! Take Raaz for instance, the film had gorgeous songs but didn’t shift away from the feel of the film. I felt it lacked in that department. The acting was great from everyone. The costumes and cinematography are breath-taking.

The famous "Hare Ram Hare Ram " which is actually a copy of the famous Korean group JTL song, "My Leon" 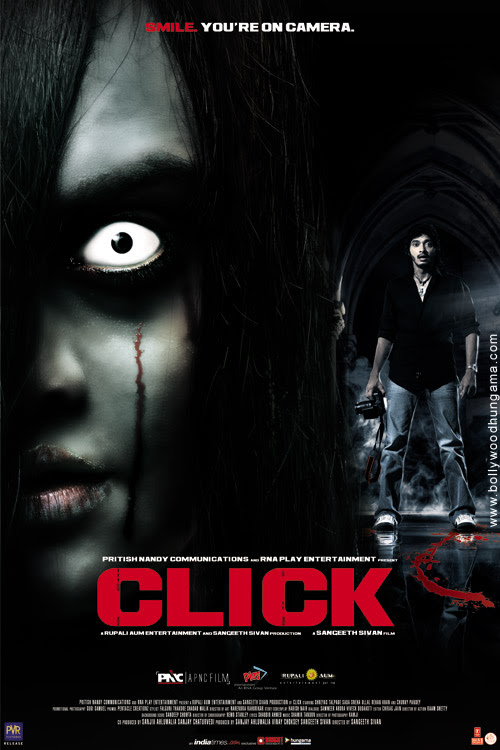 Click is the Bollywood version of the famous Thai horror, Shutter. Besides a Hindi remake, there has been several remakes - Shutter (Hollywood), Photo (Telugu), & Sivi (Tamil). It's about seeing a certain ghost in photographs that you take. What does this ghost want? Shreyas Talpade is the reason for me wanting to watch this film. Then I found out that that Sada who I adore was in the film. Honestly, Sneha Ullal is too pretty to be a ghost. I'm a fan of the original and was a bit iffy about watching. However, I finally did. It's okay. Not a bad adaptation BUT....the forgiveness and pace in Click was too melodramatic for a horror film. Why, Bollywood?

A haunted farmhouse with previous owners and mysterious deaths. No one wants buy it but it must sell! Film started off right with haunting moments. However, it fell through in the middle. Instead of it being focused on Charmi, it switched direction to Sivaji. I like Charmi a lot. However, she looked awful in the film. She is a volumptous, beautiful woman who wore unflattering outfits. The stylist should be fired! And WTF with that "My Humps" by Black Eyed Peas? It came out of no where. I was highly disappointed in the film cause it had so much potential..

Check the "My Humps" Mantra style

A girl is in love and wants to marry her love. However, she can not because she is cursed. She may never marry or death will come. Her lover wants to end this curse and will find a way to be with her. I love the Bhatt’s. It is done the way right with melancholy music that flows with the film. My only problem with the film is the poor lighting on the flashbacks. You could tell there were beautiful costumes but it wasn’t shown with the best lens. A special shoutout to Aditya! He is just too adorable on screen. He reminds me so much of a Filipino actor. For those who may not know, he is the son of the veteran singer, Udit Narayan!

Check out this beautiful song, "Shaapit Hua," sung by the one and only, Aditya Narayan. Not only did he act in this film, he has sung this song and also written and composed it, as well

fab, i totally agree with you on Bhool Bhulaiya, hey should have thrown out the comedic side plots, as per the rest i haven't seen any of them but Shaapit looks ok. I haven't immersed myself in the world of Bolly Horror i think a good place to sart would be with the work of the ramsay brothers, a here'a mini doc of their work on youtube
http://www.youtube.com/watch?v=17j98v0qMQY

You have to watch Anasuya. It's not a horror, rather thiller.

Shaapit sounds hillarious, course? LOL, I love those thing, I may watch it in future :D

I love the horror genre, and it was such fun to read your post, supplemented by your knowledge of tamil and telegu cinema. "Click" doesnt interest me, because there are so many versions of it in every language possible, and "Shaapit"'s casting is just way way meh. Casting is what saved Bhul Bhulaiya for me- fun!

Actually, Bhool Bhulaiyya is not as good as Chandramukhi (Tamil) which i felt handled the scene where the wife is revealed to be Chandramukhi really well. Also, Chandramukhi 2 is in the making for Telugu , starring Venkatesh.
Have you watched 4Bia, the thai horror film? I'm a horror fan too, and i really enjoyed it...
Other South Indian recommendations will be:

2.Janma Nakshatram - Tamil
(it's an 80s movie, based on the Omen, but i found it super creepy)

3.MUST WATCH!!! Yaavarum Nalam - Tamil (Madhavan, not horror but more thriller, one of my all time faves!)

4. Anakokunda Oka Roju - Telugu (Charmi, actually this is more of a suspense flick than a horror one- it's about a girl trying to recollect a day that went "missing" in her life, quite a good attempt)

Hope you enjoy some of this!let me know if u've any more recommendations! I heard of a Telugu movie called Aa Intlo but haven't watched it...

bollywooddeewana - that's what killed Bhool Bhulaiyaa for me, the comedic parts, urgh.

Louella - I will check your page soon :)

Shweta - Yah, I knew you were comment cause we discuss the horror genre before. There are many versions of Click but still worth it a watch, might make you wanna watch the original :D

Shona - Woah, I may have to watch the Tamil version.

Thanks for the recommendations.

Fun post! Interesting that I didn't yet know about Hare Ram Hare Ram being ripped-off from JTL. I used to like Pritam, until Zara Zara Touch Me. No one steals from Wang Lee-Hom~! I really like Bhool Bhulaiyaa, but I love pretty much every Akshay Kumar movie - I threw Chandramukhi into my Netflix queue after this.
The part about Click reminded me that I have, actually, seen Shutter. I quite liked it, and therefore avoided all subsequent remakes.
I JUST suffered through the horror that is Mantra. I love Charmy but man is that a horrible movie. The only part I was entertained was the dance number you highlighted. And that only because I knew it was a copy of something and, I like watching her dance. Much preferred her in Pournami though.