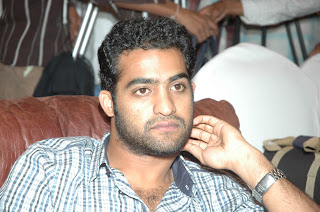 I know, I know. I already did a mini-review of Tarak's Kantri but I need to do mini-reviews of all the films I've seen so far....

After Yamadonga, which I have also listed on one of my favorite Telugu films, I really started to like Tarak! There's just something about him. He is just so charismatic. Admittedly, I am a very shallow person but his dancing intruged me even more. Tarak has the sexiest voice!!!

Jill who is Tarak's #1 fan got me on the bandwagon! So over the weekend, I watched the stack of unwatched dvds I had sitting...and finished them!

Samba (Tarak) is a badass. Many fear him but respect him at the same time. Education comes first to him and wants others to do well. It will almost be a whole year since he has been in his village. He was banned from AP because of a bloody warzone.

The beginning half was humorous with Genelia being the love interest. At first, the reasons for her character, Sandhya,  falling in love with Samba, had me shaking my head. However, I thought about it again and realized that a lot of people are like her, especially with celebrities...falling in love with what you hear about a person and wanting to marry them! The way they both met was really cute. She just did a prank call to his home using all her friends and her lucky numbers :D She is really cute but have some really fugly outfits in the songs! Oh gosh!

The film clearly belonged to Tarak! I preferred the second half of the film with the flashbacks. You got to see why Samba is this angry man.  Honestly, I was waiting to see when Bhumika would pop on screen. Even though I'm not a fan of hers, I do like her in what I've seen. The love story with her character, Nandu, and Samba was really sweet.

And on top of that, you get to see more of Prakash Raj :D
He is always a pleasure to see since he always gives it all and is the most versatile actor ever! In Samba, he is bad Prakash :D (see Liz's blog on her Prakash ratings)

Ashok's father (Prakash Raj) disowns him because he blames Ashok (Tarak) for his grandmother's death. He is sadden and tries his best to win his father's heart again. Seeing Anjali (Sameera Reddy), Ashok falls in love with her. However, K.K. (Sonu Sood), a rowdy, also falls in love with Anjali as well and vows to marry her at any cost! Since K.K. plans to be in politics, instead of just killing off Ashok, K.K. and his mother (Vadipukarassi) plot against Ashok using his father to open up and warm him in his life again to lure Ashok away while they scheme to kidnap Anjali.

Definitely worth a watch! Probably my third favorite film of Tarak's after Yamadonga and Rakhee (look below for my mini-review and thoughts).

Very bloody film! Even with one smack, you see blood gushing out! It didn't bother me since I watch all types of films and genres. So yes, it's a very violent film. My eyes widened more than a few times in many scenes. The fight scenes were choregraphed and filmed very well.

What made the film really work is the acting from everyone.
Not to mention Tarak and Sameera's chemistry! There were rumors that the two of them were romantically link. I can see why. Out of all the heroines, Tarak seems to be very comfortable with touching and kissing her!

The dancing is amazing!!! Not to mention that it is choreographed from my fave, Lawrence :D

For those who want to see more of Sonu Sood...he is looking extra yummy in the film! I just couldn't take my eyes off of him at all!

Rakhee (Tarak) loves his sister, Gayathri (Manjusha), so much! The two of them are childhood friends with Tripura (Ileana D'Cruz), who is a news reporter in TV channel who fights and exposes atrocities against women. Rakhee and Tripura are in love but are subtle about it because in order to save face for his family, he promises to marry his cousin Gowri (Charmy) so his sister could marry a software professional (Ravi Varma) in a well-off family moving to the USA. However, everything turns around when Gayathri's greedy in-laws and husband burn her alive for more dowry. Devastated and delusional, Rakhee sees his burning sister everywhere. Without the help and support from the police, Rakhee becomes this super hero by killing all men who harass women.

OMFG. This is Tarak's best acting...EVER! He shows off his comedic side telling Charmy that she's too heavy for him to carry to his serious side when he takes the law to his hands. I am very wowed and impressed!

Even with Tarak's strong performance, the two ladies were impressive as well. Ileana's character, Tripura, wanted women's right and tried to fight for it and even goes undercover too! She is the western girl who Rakhee cooks for and teases. Charmy's character, Gowri, is so adorable and funny. She always adds her spunkiness to her role! She is the traditional, naive girl who falls for Rakhee and is the perfect housewife.

What I loved more is the brother-sister love that is shown. Interesting enough, the hero's name is Rakhee and there's an Indian holiday, Rakhee Bandhan. With Rakhee's super hero act, he leaves the sacred thread behind to mark his appearance at the scene. 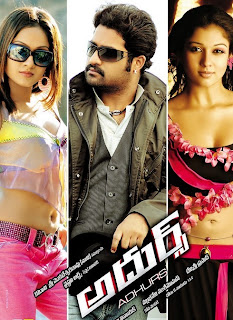 Twin baby brothers get separated at birth in the hospital. A single mother raises Narasimha (Tarak), who grows up to be an undercover agent and is in love with Bhattu (Sheela). Chari (Tarak) is raised by a family of traditional Hindu priest and is in love with Chandu (Nayantara). The two of them finally come face-to-face when Chari is asked to act as Narasimba since both look a like. Little did they know that they are long lost twins. 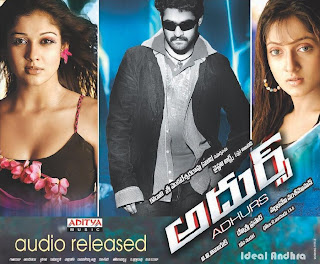 Who says the twin theme being switched at birth is dead in Indian cinema? Well, maybe in Bollywood....it is.

Even though the film is not brilliant, it is very enjoyable! There were just so much flashbacks bringing me back to my nostalgia childhood to why I started watching Bollywood films, whether it's Seeta Aur Geeta or Ram Aur Shyam.

I enjoyed the comedy a lot, especially from Tarak. He does a great job with playing two characters in the film. The girls were mainly there for the love interest and songs but did their best.

So far I have watched six Tarak films. Out of the six, four of them have Tarak's character names as the title - Samba, Ashok, Rakhee, & Kantri!

I am looking forward to watch more of his films since I enjoyed each and every one of them I have watched so far! I hope I can find them all. Until then, I will wait for Brindaavanam on dvd :D
ApunBindaas Nicki at 12:37 PM

I've been waiting for this type of post. I'm opening up a blog in a month and this would be really helpful to me. Looking forward to see more tips and information here!

I really enjoyed reading this post. Keep up the good work.Thank you .

When I'm free of expense, I generally scan online journals on the web. Your is the best one, according to my research. Hire our proof-reading.services and get rid of your never-ending academic works! We are familiar with all that we do!