I started this post a few days ago and got sick, constant coughing :( Therefore, I couldn't finish up this post.

I've been soooooo behind in blogging this year! Urgh. I have been wanting to write up another review but since I'm a visual whore, there was no way I was going to do a full review with *out* any screen caps.

Here's some films I watched but haven't blogged about....
I will continue the Telugu mini-reviews later.

Sameer (Shahid Kapur) has big dreams to make it big in Mumbai. He meets the choreographer, Tina (Genelia D'Souza), at an audition and ends up being in a film with her. However, his world turns upside when he ends up homeless and jobless. With the encouragement and help of Tina, he ends up putting his life back together and participate in a tv talent show.

I've been wanting to see Shahid and Genelia in a film together for the longest. He has a babyface and unfortunately, most of the heroines opposite him look too old for him with the exception of Amrita Rao and Ayesha Takia. Therefore, I was looking forward to the Shahid-Genelia jodi. However, this movie did not live up to my expectations.

Don't get me wrong. It's not a bad film but it's not a good one either, so it's meh. I wanted to see more dancing. I was so disappointed with the choreography. Shahid is a fabulous dancer but the film didn't portray his dancing skills.

Simran (Sonam Kapoor) has the perfect life! She has a loveable fiance, Raj (Sameer Dattani) who is exactly like her. Both love being in love and live a fairytale life. Raj is her prince charming, everything who she has ever dreamed of. But why does she second-guess herself when she meets Jay (Imraan Khan), a guy who is nothing like her Prince Charming? He is hates anything to do with love!

Even though my brief synopsis may be focused on Sonam, it isn't. The film is all about Imraan! He does really good in his role and has cute facial expression. Sonam is gorgeous and has strong fashion-sense but her acting needs to be worked on. Sameer is cute but was just there.

Direction is weak. Storyline is nothing new but that has never stopped me for loving a film before. I am completely in love with the soundtrack. I don't hate love stories. I just don't care for I Hate Luv Storys.

Deva (Surya) is a cool, slick smuggler and works for Dass (Prabhu Ganesan), who Deva's mother (Renuka) does not approve of. She does not understand why a smart guy like Deva who has a Masters Degree would do illegal things for quick cash. She wants him to have a government job instead.

Chitti (Jegan) joins forces with Dass and Deva. Kamalesh (Akashdeep Saigal) is a jealous foe who wants to be on top and tries to take down the trio.
Deva falls for Yamuna (Tamannah Batia), Chitti's younger sister.

I haven't seen a fun-filled masala film like this in a while. Everything about it, I loved! Surya looks hotter with age. That man is just too good-looking! I had to wipe my drool off several times! Even though Surya is more than a decade older than Tamannah, I couldn't see it. He looks that good. Tamannah is one of my favorite actresses. I've loved her in everything I've seen! Cannot wait to see her with my favorite hottie next! That jodi will be sizzling!

Everything from the storyline to the direction to the songs to the acting were on point. What I love most is seeing how gorgeous Malaysia and Congo are. I cannot complain at all. I just want more affordable, accessible Tamil dvds for me to buy :D 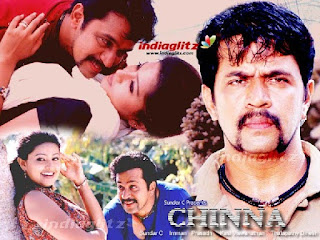 Chinna (Arjun) is a rowdy to be feared and don't care for anyone. All this changed when he met Gayathri (Sneha). He ends up going to jail and Gayathri is forced to marry someone else. What happens when he gets out of jail and comes back to Gayathri's life?

Since I have the Arjun crush, I watched this film for Arjun Sarja. I was stoked to find out that Sneha is in the film too. However, this movie, I would not recommend to anyone. Only watch if you're a fan of Arjun or Sneha. I was extremley disappointed. Sneha had the most fickle character ever. Arjun was good but even he couldn't save the film for me. Total Bore!

Even though Arumugham (Vikram) is uneducated, he has a strong heart and mind to become the leader to take down a factory that is polluting his village's water. He, along with his grandmother and Eeswari (Jyothika), goes to Chennai to meet Minister Kaalapaandi (Sayaji Shinde) to alert him of the situation.

Overall, the film is good. However, I preferred the second half over the first. The first half was silly with Eeswari and her love-hate relationship with Arumugham. Adding the sexy Swapna to the love-hate angle just made it more comical. I didn't really care for it and found Eeswari very annoying! The second half focused more on the plot of the crooked politicians and government.

Vikram is a handsome man but I don't drool for him like a lot of my online friends do. Besides being a pleasure to look at on screen, he is a good actor. I love Jyothika but disliked her childish character. Reema Sen was good to see and looking lovely.
Definitely worth a watch but I don't love it.

Many people said the same about CPD... But I look forward to watching IHLS... and I like Sonam!

Ooh I know you didnt dislike it so much, but I totally hated IHLS- I had the best company to watch it (a grou of local Bolly enthusiasts), but I kept wanting to shoot mself every 15 minutes or so. I want to watch Dhool for Vikram, and Ayan looks really good!

see, IHLS !! i too thought i would love it, but ended up disaster.

Mmmmm... Ayan :D Such an awesome movie! It really deserved its own post, just sayin'... :)

And as a die hard Shahid fan, I have to object to the CPD "meh" rating in terms of dancing. I agree that there is too little of it for a dance movie, but what is there is absolutely fabulous in my humble opinion. Shahid has never done anything like it in any of his other films, my jaw was on the floor when I saw it in the theatre. He makes it look like a piece of cake, which is probably why not many people appreciated his dancing in this, but some of the stuff he does is really mindblowing even for a seasoned dancer like him. Genelia on the other hand, the less said about her dancing in this, the better :) It's not a good movie overall, I know, but I still love it. If only for Shahid's delightful acting :)

Lime - I like Sonam but don't think she's that great of an actress, that's all.

Shweta - hahaha, so you did hate luv storys, huh? I have to watch Majaa, I have it sitting around but haven't gotten around to it yet :D

Dolce - I know...I started caps on Ayan but gave up :( instead I'm doing mini-reviews.

Honestly, I have been spoiled with the awesomeness of Southie dancing that I thought CPD was just meh :(