Ram - the next Telugu Superstar, taking a look at his films!

I discovered Ram through Louella who did her wonderful graphics. With that one avatar, I was interested who this Ram guy was.

With that knowledge, I decided to start watching his films. Little did I know that I would see an entertaining, young new face! His dancing astonishes me because he's so vigorous and gives it his all!

Next thing I know, I have completed watching Ram's short filmography but am looking forward to his forthcoming film releases!

Below is just a recap of his films :D

I bought the dvd learning that the title was called Devdas....and wrote a short review/synopsis on a mini-review I written earlier.

Don't get it confused with the famous film, Devdas, in Hindi. This film has nothing to do with that. It's just the name of the hero. No, he doesn't sap all day long not able to be with the one he loves. This Devdas is just the opposite. He's ruthless, cool, modern, and hip. But he is unselfish. Film is both Ram & Ileana's debut film. Ileana is the NRI who comes to India to learn music but ends up falling for a guy who her father disapproves. Story is nothing new. It was refreshing to see another college setting. Admittedly, film was a bit long though. Some parts were entertaining while others could have been avoided. 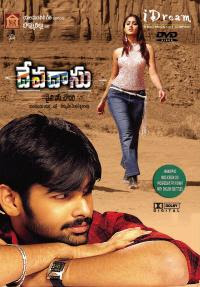 Since childhood, Sreenu (Ram) enjoys fighting and violence. Unlike most yong kids, he wanted to grow up and be in a gang! When he got older, he tries his best to be feared and be on top and create his own gang. He eventually starts to fall in love with Subbalakshmi (Isha Sahani). When he realizes that his younger brother looks up to him, he gives second thought about his gangster paradise.

Overall, I really really enjoyed the film and Ram really impressed me. He was able to show his comedic side without having Sunil as a sidekick. Isha is really cute but didn't have much to do.

I really enjoyed the songs!
The implied sexual scenes were hilarious, especially eyeball licking, haha...but still no lip-to-lip kiss? :D
Definitely worth a watch.
PS - Prakash Raj has a special appearance in the film.

Chandu (Ram) and his friends mistakenly kidnap the wrong bride, Pooja (Genelia D'Souza) for one of their friends. Coincidently, Pooja was planning to runaway from the dreadful marriage anyways. She asks them to take her to Kurnool. On the voyage there, Chandu ends up falling for Pooja.

It is the biggest hit of Ram's career, which established him as a wonderful actor. Even Bollywood plans to remake it with Salman-Asin!

It is a fun family entertainer. However, it was a bit long for my taste. If the length was shorten, I would have enjoyed it more. The acting and chemistry between Ram and Genelia were amazing. This was my second Ram film and appreciated him a lot! Genelia is one of my favorite actresses so I was happy to watch it.
PS - Tamannah and Navdeep have a special appearance :D

Krish (Ram) just wants an easy life so he decides to start to woo Manju (Sheela) to get a free trip to the USA and be rich off of her. He tricks her in telling her a fictional tale that he is in love with Meenakshi (Hansika Motwani) from stealing one of her pics from her resume. Once he starts to trap Manju in his scheme, he really does meet the girl from the photo -- Meenakshi!! Now, both Krish and Meenakshi started to develop feelings for each other. 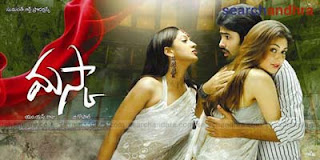 Overall, I really liked it. Both Sheela and Hansika were good! Sheela really impress me and reminds me of a young Sridevi. I prefer her in traditional clothing like in Parugu and she danced very well. Hansika looked really good with minimal makeup and traditional outfits. This is my favorite film of hers. Ram was cute and charming showing off more of his comedic side. 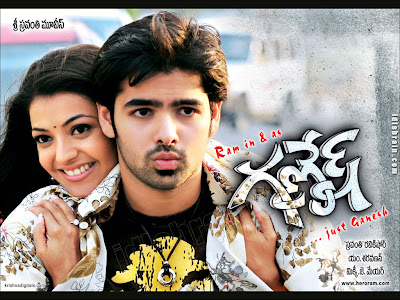 Ganesh (Ram) is an orphan who is very unselfish and always willing to help out others. One of his friends has an arranged marriage with Divya (Kajal Agarwal) but loves someone else. He vows to win her love so that his friend could be happy. In the process of making Divya fall for him, he ends up falling for her. However, it's too late when she finds out the truth. Now, he must prove to her that he really truly does love her and that it wasn't just a joke.

Definitely one of my favorite film of Ram and Kajal! Both look their best EVER! I really like their interaction with each other. It's such a cute romantic comedy, especially how Ganesh gets Divya to lure in his game in finding out who this Ganesh is. I love the interactions with Ganesh and the kids at the apartment and how Ganesh makes the kids trust him. The cutest part was when the kids starting calling him Superman and the heroic action starts coming out :D 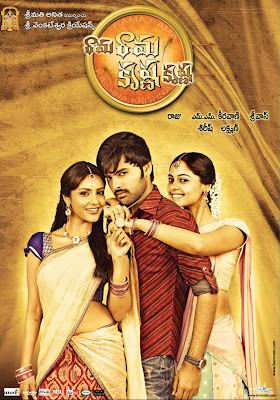 Rama Krishna (Ram) is a silly, fun guy who wants to live his life to the fullest and pretends to be the perfect son in front of his father (Nassar), who happens to be the village president. The don, Ashok (Arjun Sarja), moves from Mumbai to Gandhipuram to escape his past with his two sisters. Rama Krishna and Priya (Priya Anand) falls in love but Rama Krishna ends up getting on the bad side of Ashok. 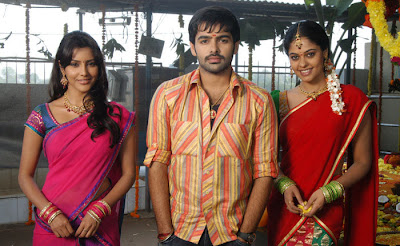 Honestly, I was debating whether or not I love Rama Rama Krishna Krishna or Ganesh more. What I loved most about Rama Rama Krishna Krishna is the usage of the star cast! I absolutely adore Arjun Sarja and loved him so much in the film. I loved his cool, badass character. Gracy Singh had a short role playing his wife but I was happy to see her. Having two lead newcomer heroines, Priya Anand from Leader and Bindu Madhavi from Avakai Biryani, play Ram's love interest added the cherry on top for me! Ram gets better and better in each and every one of his films! Each year when his film releases, he gives it his all.

I look forward to watch more of Ram's forthcoming films!
Kandireega, which is scheduled to release April 11th!

Great post! I haven't really been trying to watch Ram's movies, but I realize now that I've seen 4 of them, and 3 of those were a lot of fun. I loved Jagadam, I thought it was a really interesting plot, plus a surpise appearance by Prakash Raj--yay! Even though Devadasu wasn't exactly good, the chase scenes that were supposed to be in the US were pretty funny/weird.

Based on your review, I'm definitely going to check out Ganesh.

Hahaha, for the second time after Vishal I grabbed your attention :D I'm flattered ^^

Thanks Nicki for listing Ram's films. I have made a note and will try to see if i can find any of these over here.

I must admit I had a copy of "Ready"for a long time but returned it without watching - dunno why.

Liz - thanks!! I agree with what you said about Ram, at first I didn't seek his films but realized I only had a few left to watch so why not? I think you will like Ganesh!

Louella - It's Vishal then Ram, and then Priviraj :D Thanks for the eye candy :D

Filmbuff - You're very welcome! I hope you get to watch them. Give Ready a try and do come back and post your thoughts :D