Ajay (Manoj Manchu) is a free-spirited guy and doesn't take anything too seriously, just living a "bindaas" life. His family has estranged him from the tree due to a conflict that his deceased father had done in the past that caused another family to rival with each other. The feuding is so chaotic that each opposing families want to kill each other. In order to close the gap with the family, Ajay plans to unite both families together.

Manoj Manchu!!!! Why did I take soooo long to watch this film?? I absolutely looooved Manoj in the film. His character is soooo freaking adorable. Not only that, Manoj is also a cutie pie. His dimples are to-die-for! He gave his character his all and did an awesome job. I've said before I love fun, loving, carefree, unselfish guys and that's what his character is all about.

Sheena is mostly there for the songs but has a cute love interest with Manoj. She was seen in Bollywood with Teree Sang. The storyline is nothing new but it was great to see fresh faces and laughable comedy. Definitely worth a watch. 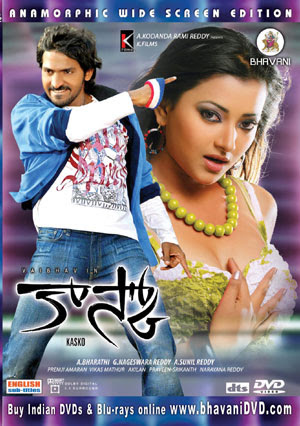 Vamsi (Vaibhav) goes to Hyderabad and ends up meeting Mahesh Babu (Brahmanandam). He then goes by the name Pawan Kalyan who joins with Mahesh to end rowdism. But he really came to search for his lost love Krisna (Shweta Prasad) who has been abducted by rowdies.

I mainly watch this film for Shweta Prasad who I found adorable cute in Kotha Bangaru Lokam but just like Kalavar King, I was disappointed :(  Unfortunately Kasko is one of the most boringest movies I've seen in a long time. The storyline dragged and dragged. Not only that, I hated Shweta's annoying character. I did not understand why Vamsi would fall for Krisna at all! Vaibhav was a cutie and danced well and I wouldn't mind watching more of him in the future.

Kalyan (Ravi Teja) is no ordinary guy. He likes to spice up his life with getting a "kick" out of life by adding the extra oomph or adding a cherry on top. Otherwise, it'll just be another boring life. Naina (Ileana D'Cruz) hates Kalyan and he only falls for her to add a "kick" to the story. Eventually, she ends up falling for him but leaves him only finding out about him lying to her about having a job. She ends up living in Malaysia where she meets a tough cop, Kalyan Krishna (Shaam) who is seeking an anonymous thief from India and now in Malaysia. 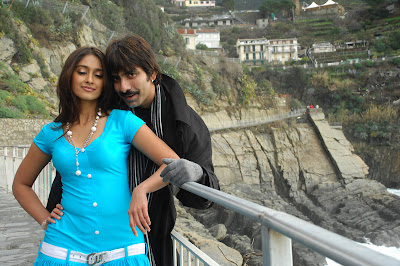 The length could have been reduced a bit and let go some of the comedy tracks but overall, Kick is absolutely fun! I enjoyed it a lot. Storyline added a "kick" and that's what made it worth watching. I absolutely love Ileana D'Cruz and see her acting growth as an actress. This is my first Ravi Teja film and he's hilarious in his role. There's rumors about a Kick remake from Bollywood starring Salman with Deepika or Sonakshi. 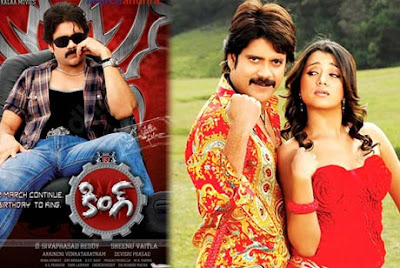 King (Nagarjuna) is a badass ruler and everyone is scared of him...until one day he goes missing. Is he dead?
Enters Seenu (Nagarjuna) who is rowdie and works for the fearful Gyaneshwar (Srihari). Seenu falls for Sravani (Trisha Krishnan) but steals the identity of Sharath (Sunil) to woo her. Seenu, now Sharath, and Sravani are in love.
Seenu looks like the missing King and gets abducted. He is paid to play King to unite and bring the King family together.

Worth a watch. King takes you for a fun ride but I had to re-wind a few times because I got confused with all the different characters Nagarjuna played. Made me re-think who really is dead, the King or Seenu? Or none? Whew! The twist exploded in my brain :D

One of the best parts were the performances. Nagarjuna is definitely the king. Trisha looked really good and is really good in comedy. Mamta had the supporting role but did a great job and wowed me. The songs are great, especially the title song. However, the film is more known for the song, "Nuvvu Ready" because of the many guest appearances by actresses, including Trisha and Mamta -- Anuksha Shetty, Charmy, Genelia D'Souz, Priyamani, Sneha Ullal, Kamna Jethmalani. 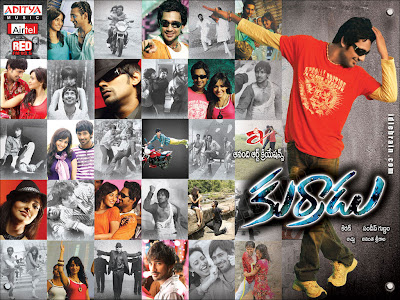 All Varun (Varun Sandesh) ever wanted was a bike. He dreams of it day and night. His father works hard and doesn't have extra cash to give him to spend on something useless. After many bitter disagreements, the sad father finally gives in. With the brand-new bike, Varun tries to be responsible and get a job to help his dad with the bills. He is in love with Hema (Neha Sharma) for two years. With the new bike, he could take her to her destination instead of her taking the bus. Unfortunately, Varun ends up getting dragged and involve with some rowdies and his bike gets stolen.

Kurrudu is a remake of the Tamil film, Polladhavan, which is inspired from the Italian movie,  Bicycle Thieves.

Since I absolutely adore Varun, I wanted to see more of his films. I was stoked to find out the heroine is none other than Neha Sharma because I think she's a hottie in Chirutha.

Varun's role is much different from his other two films, Happy Days & Kotha Bangaru Lokam, which he plays a college student. This time, he shows off his baddass and beats up rowdies. Neha is the bashful, sweet love interest and still looks gorgeous and sexy, covered up.

Worth a watch but the beginning is really slow.
The film is more about being at the wrong place at the wrong time with misunderstandings and backstabbing. The love story takes a backstep, along with the family values, which were shown in the beginning half.
If you are used to Varun playing the loverboy, stay away because you will be disappointed!

Mitra (Sharwanand) and his sister (Surekha Vani) lost their father at a young age. His mother is forced to marry another man (Saikumar). He takes the responsibility of raising them two and ends up having Chinna (Sandip) with their mother. Since childhood, his sister hates the fact that her mother remarried. On top of that, she hates Chinna because he is the product of the marriage. Mitra loves Chinna and is a loyal son in his step father's political field. Chinna always felt alone, unloved, and unappreciated compared with Mitra. Therefore, he becomes angry and careless about life becoming jealous of Mitra.

Dolce did a wonderful full review on the film, along with comparing it with the Cain and Abel theme.

One of the best political films ever! From beginning to end, to the performances, to the screenplay, everything was just perfect. The songs just released some tension that was stirred up and added a nice feel. Each character had enough volume for you to understand each one.

I adored Sharwanand since Gamyam and was excited to see Prasthanam. He stepped it up several notches with his acting and choice of film. Ruby Parihar is cute and really had nothing to do but be in the songs and a love interest.

The film is a bit long, falling right under 3 hours but you don't really feel it because you get really into the characters and want to see what is going on.

I absolutely love Kick! I watched twice! Still laughed so hard even when I watched it the 2nd time.

No matter what, a hindi remake with Salman in the lead role doesn't look promising.I can't think of anyone in Bollywood who can do a decent job in portraying the role of Kalyan.

Yay! You finally saw Prasthanam!! So glad (and relieved!!) you liked it, I was a little nervous because I know you're a bit of an expert in the genre, and I figured you'd be more critical than me. It passed the test: phew!

I have had Bindaas and now King lying around for a while... argh! It sounds like it's time I got to watch them... Kick too! I was reasonably excited about Bindaas, but your comment about MM made it even more appealing. :)