Vaaranam Aayiram - Surya in a double role, triple role if you ask me 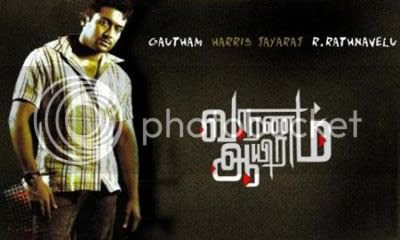 Since I've become a diehard Surya fan, some people have been telling me to watch Vaaranam Aayiram. It is his latest film and Surya plays a double role. Just hearing that, I was so excited to watch it. Double dose of Surya! Here I come. Plus Sameera Reddy is in the film. I adore her and feel she is just as sex symbol in Bollywood but in South Indian films, she has more scope. 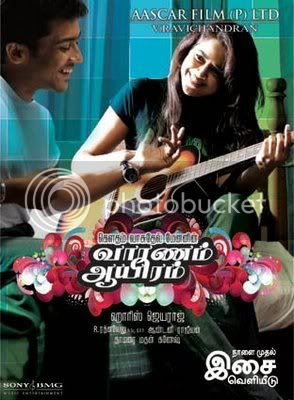 The story of Vaaranam Aayiram is narrated by Surya (Surya). Surya was on a military mission when he found out his father Krishnan (also played by Surya) passed away. Never did he thought he would lose his father. He thought his father would be alright and be there when he comes back on his mission.
He thinks about his father's life -- how he met his mother, and how he raised his family. All this affected the way Surya became the man he is today. The way the film narrates this beautiful story is simple, yet amazing. 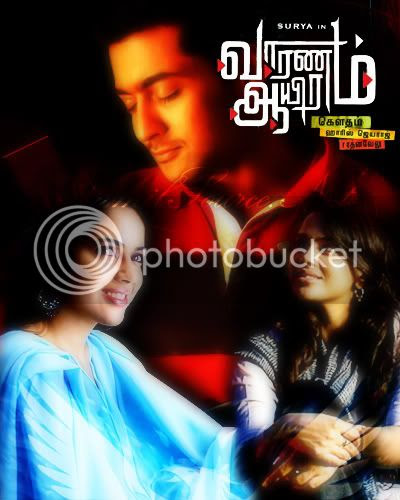 The film title Vaaranam Aayiram literally means "the strength of a thousand elephants." The film is told through Surya's eyes. He narrates how he wanted to fall in love like his parents did, how much they were there for him, and his journey through life, along with his love. Basically, his father is his inspirational hero. 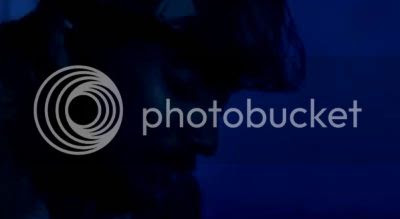 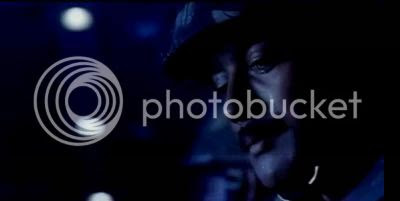 The film is told mostly in flashback as Surya looks back as his life. 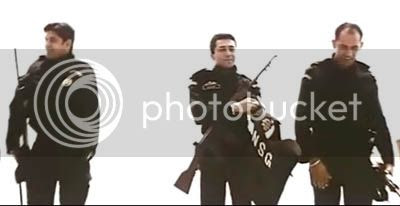 Once he has completed his job, he will be able to go home. Love a man in uniform. Sexy. 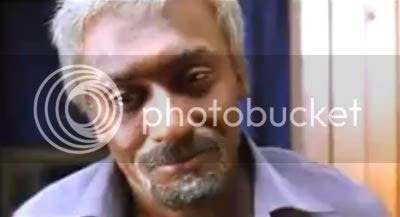 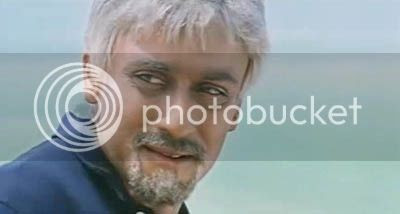 Sometimes when I look up Surya, he's known as Suriya, as well.

Surya is my number Indian actor now, doesn't matter if it's Bollywood, Tollywood, or Kollywood. He tops it all now. Not only is he hawt, he can act and I've enjoyed all the films I've seen of him. I have been reading about Surya being the Aamir Khan of Kollywood. Perfectionism and putting his heart in everything he does. Surya talks about Aamir being his Guru and that Aamir's Ghajini version was better than his. Love him even more for that since Aamir is my favorite Bollywood actor.

Although Surya is in a double role, the reason why I think Surya has a triple role because he portrayed Krishnan in college, as well. 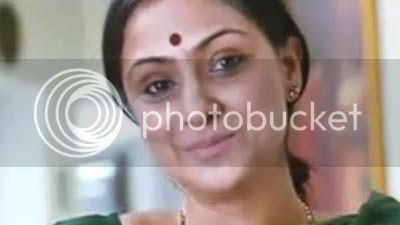 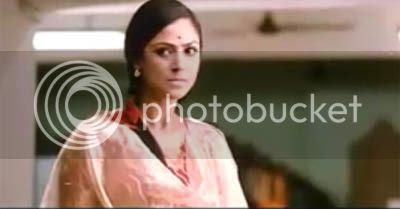 Originally Tabu was to play Malini, but Simran stepped in. I think Tabu would've done justice to the role. However, I am glad to see Simran in the role because I wouldn't have wanted it changed in any way.

Just wanted to share family caps of Krishnan and his family.

Meghna is Surya's first love. He loved her at first sight but eventually she fell in love with the kind-hearted guy. Tradegy hits and Meghna is no more. I really like Meghna because she didn't fall for the I-Love-You-At-First-Sight bullcrap, she told Surya how it is, it was just lust. When she finally got to know him, she did fall for him, which I liked a lot.

Originally, Genelia was to play Meghna. As much as I love Genelia, I think casting Sameera was a perfect choice. Sameera has a mature, womanly look to her that I love. After watching the film, my girl crush for Sameera has grown stronger. I've always adored her but she just lights up the screen. 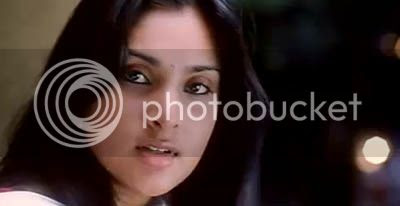 Priya has grown up with Surya and has always loved him. Even though he is in love with Meghna, she still waits for him. Later, Surya eventually falls for Divya and both of them marry. Even though Priya was never first choice for Surya, she understood that he had to get over Meghna first. The Priya-Surya love story was simple and just as sweet.

Before Divya Spandana bagged the role, two other actresses were originally casted - Deepika Padukone and Asin Thottumkal. Divya is definitely a cute girl and acting is okay.

Song #3 - "Nenjukul Peidhidum"
Surya falls for Meghna
OMG, this song is soooo beautiful, and I've been listening to it non-stop. 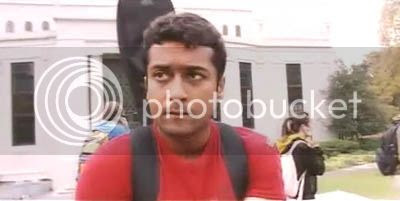 Song #5 - "Adiye Kolluthe"
Surya is having fun in the USA. Meghna finally starts to fall for Surya. 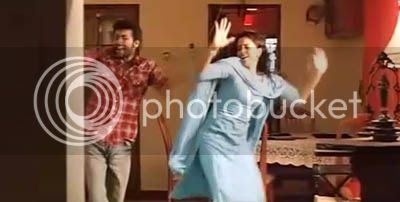 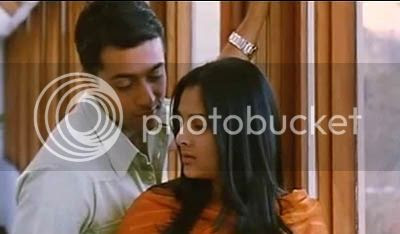 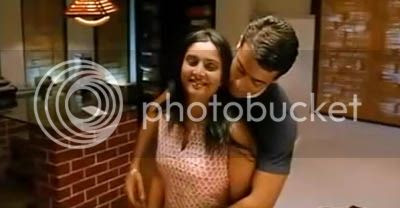 Enough about me raving about how great Surya is. I do have to give the director, Gautham Menon, major props!!! He has directed Kakkha Kakkha, which I've seen and loved, and Vettaiyaadu Vilaiyaadu

And the inspiration behind the film.

The film dealt with a lot of issues, which I will not give any spoilers.

Okay, I won't stop talking about Surya. His different look in the film!! This guy is amazing. With each character, Surya portrayed them well with their changes. It amazes me how much, the actor, Surya put effort into his character. 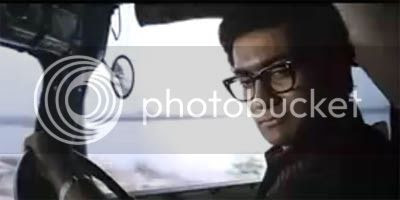 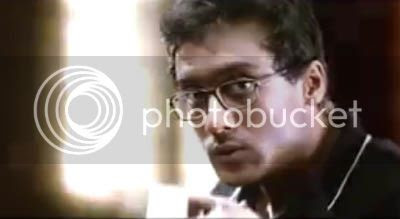 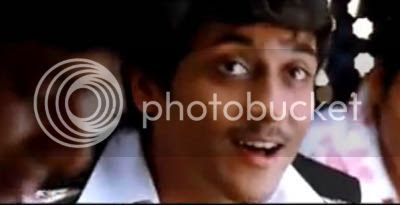 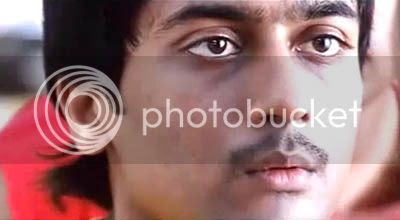 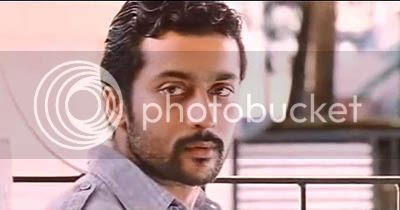 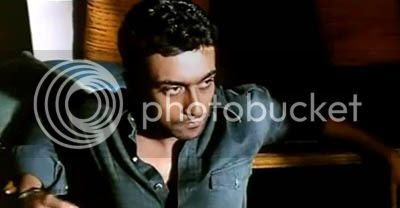 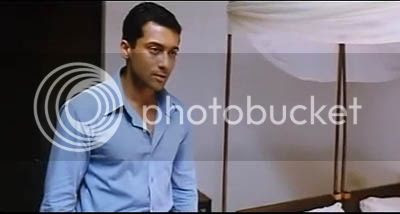 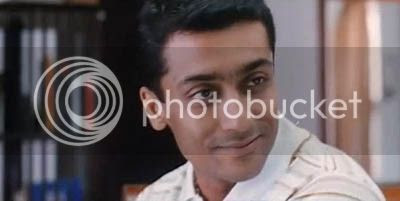 You know I couldn't resist his six-pack abs. Love the transformation in the film because earlier on, Surya was shirtless and he didn't have any six-pack abs either.

A must watch! Defintitely worth it. Or maybe I'm just drooling over Surya, lol. 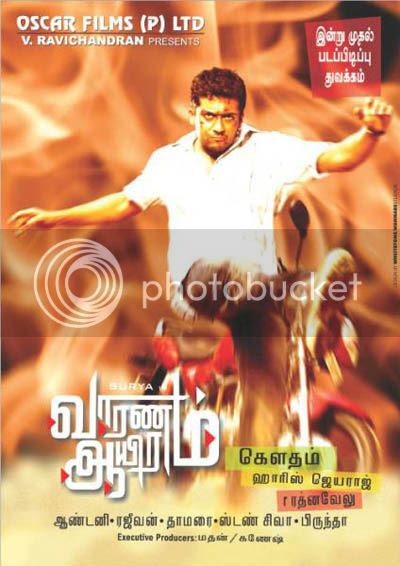 By the way, I've started watching Southie films. The first was Iruvar! It was one hell of a movie! Loved it to the core. Mani Ratnam ki jai ho!

The only reasons I sorta want to see this are because of Surya's six pack(it would be WONDERFUL--for me, anyway--to see more South heroes with toned bodies!) and Simran, who I adore.

Bhargav - I'm glad you started to watch Southies! Yah. I have yet to see Iruvar but heard great things about it. Would love to read your review!

lapetitediva - Surya is enough for me to watch any films now. So far the only South heroes with nice bods are Surya and Allu Arjun, another hottie I love. :)

workhard - Thanks for stopping by!!

Good review on Vaaranam AAyiram. Glad that you liked the movie. I've watched it more than 5 times, i dont know why, but mainly because surya's top notch performance. i agree with you, now surya is the best actor in india maybe due to his choice of movies. i would like to share with you some important info about this film. Gautham Menon (Director) made this movie in remembrance of his father who passed away before making this film. That was his journey to his funeral that made him to pen the script. It seems, Surya collected all Gautham's Dad's photographs and started working on getups. There was once Gautham broke into tears after seeing Surya(Krishnan's role) was standing infront him. Surya worked really hard to get the right look and shape to perfect into the roles of 19 yrs, youth and adult. The music is none other than Harris Jayaraj(Zara Zara of RHTDM fame), he is the most sought after Music Director in south after AR Rahman. All the best and looking forward to read more review about good Tamil movies especially, Kannathil Muthamittal, Iruvar, Kandukondain Kandukondain (Aiswarya and Tabu) also Minsara Kanavu (Kajol and Prabhu Deva).

Wow mohanavanan - Thanks so much for stopping by and the detailed comment. I really appreciate it.

Surya has topped all the actors in India for me. Never have I've seen an actor put so much effort in his performance. Aamir has done it too but to me Surya is on top because he's done it at such a young age. I simply just love him. As much as I love Aamir and his version of Ghajini - I felt Surya surpassed Aamir in the acting department in his version.

Thanks for sharing with me about Gautham. I love Surya even after you told me how much effort Surya put into the Krishnan character. I just wish there were reliable sources for me to read on South Indian stars.

Oh gosh, the movies you have listed, I have them or am getting them!! I will definitely review them and put on blog. I have seen the Hindi dub version of Minsara Kanavu already.

I've been behind with reviewing films because I have sick child but will be back soon!