Warning - this review may contain too many screen caps for you. Many images of the hot, sexy, to-die-for John Abraham are on this post. Please view with caution in case you may faint. 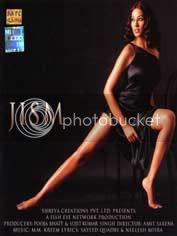 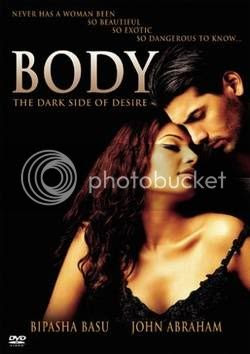 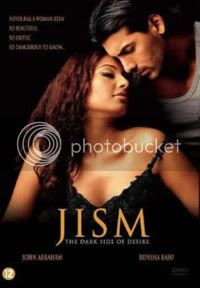 The life of Kabir Lal (John Abraham) takes a complete turn when he meets the beautiful, seductive, sexy Sonia (Bipasha Basu). Even though she is married, Kabir knows she is unhappy with her marriage and pursues her. Falling in love with Sonia even more, he never realized that he desperately wants to be with her. Suddenly without realizing the consequences, he starts to be careless and not caring about his actions. He slowly starts to self-destruct.

Why is Sonia so lonely and sad? She is a young, hot, sexy woman married to an older, rich guy.

Bipasha Basu has been given seniority over John in the film. Her name appears in the credits first before anyone else. 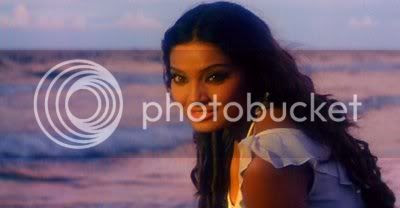 Although he is a lawyer, Kabir is careless alcholic who doesn't care much about his life. Until the day he sees Sonia, he obsessly starts to fall in love with her. Not even caring if she's married. But he doesn't care since he knows she is not happy with her marriage. He constantly pursues her not realizing he is letting himself go. 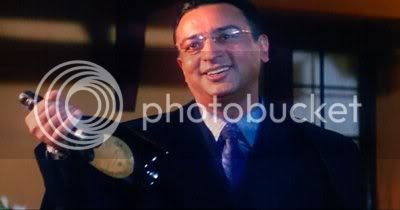 Rohit Khanna is the older, rich husband of Sonia. He constantly is too busy away from his wife on business.

Although mostly seen in supporting roles or as a villian, Gulshan Grover is a good actor!

Siddharth, a police officer, is one of Kabir's best friends. He only wants the best for Kabir, but he hates to see Kabir self-destructing his life.

Vishal, a lawyer, is Kabir's other best friend. The three of them hang out. He wants Kabir to admit what is going on with Kabir's life. 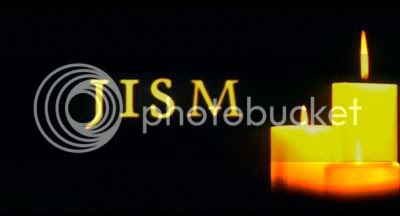 Soundtrack is one of my favorites. As I mentioned before and I'll mention it again, the Bhatt's have amazing music on their films soundtracks!!!! Not all the songs on soundtrack was in film. The beautiful, probably the best song out of the album, "Mere Khwabon Ka" was left out of the film.

Song #1 - "Awarapan Banjarpan"
Kabir loves to drink and doesn't care about anything. He roams around and suddenly sees the most beautiful woman he's ever seen. 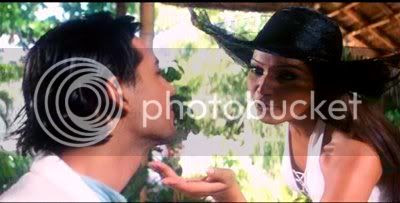 Song #3 - "Jadu Hai Nasha"
Kabir and Sonia are in love 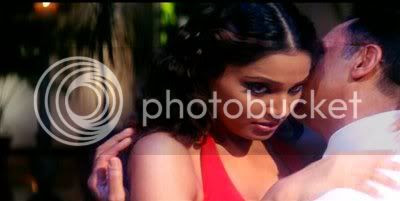 Movie starts off with the badly, wounded Kabir. He, then, takes a look at his life.

Loving the scenes with Kabir and his two friends Siddharth and Vishal. 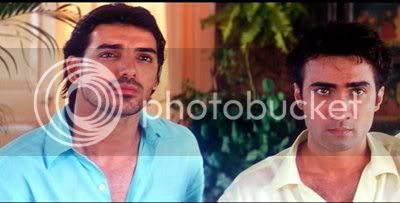 Although this film is known to be a remake, Double Indemnity and Body Heat, the following is actually from a different movie, 9 1/2 Weeks. This ice scene is frame-by-frame except it is not as graphic as the Hollywood version. 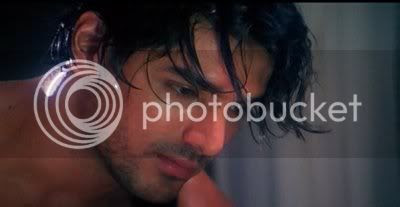 As I mentioned in the Saaya review, I love his crying emotional scenes. It breaks my heart to see him cry. Puts me to tears every time! 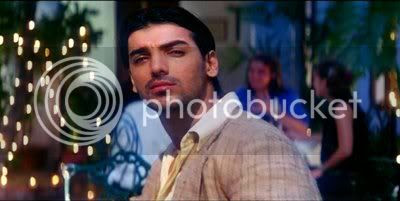 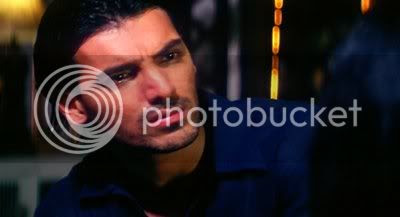 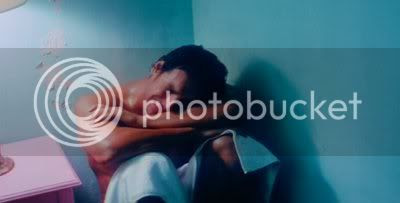 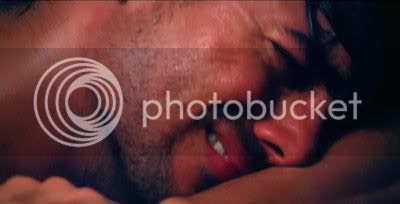 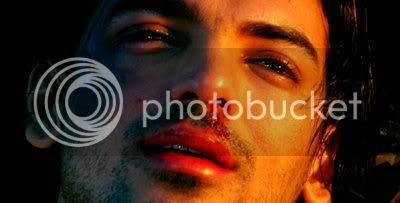 In case you didn't know, I'm just a Hmong Chick who loves John Abraham. Of course, his six-pack abs got me melted as well. 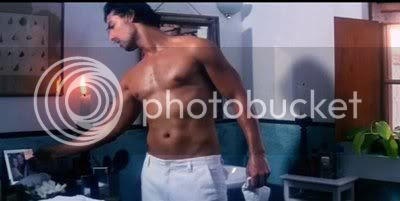 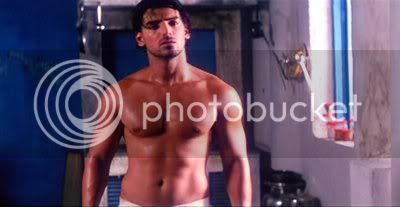 I know. I know. This may be too many screen caps to handle but I actually cut it down a lot!
ApunBindaas Nicki at 11:59 PM

Oooh....
Its winter . And i m sweating. Such a hot movie u have picked.

Let me tell u, i watched first day last show of this flick, and believe me i declared from the first scene 'good actor, he is here to stay'. See.

I think this was bips' first film too. She was sizzling. Both share Amazing chemistry (..and physics and biology and...) Oodles of hotness was everywhere.

Yes, emotional John was very good.Whenever I m alone and roaming in city at late night, i always remember this visuals.

And the song. 'awaraapan...'.
Music was outstanding. Shreya who was just one film old (devdas) did amazing job. She sound so sexy in 'jadu hai' and 'chalo'(the best dreamy song ever).

Darshit - Thanks for stopping by and putting up with my John-obsess-fanfest. Thanks also for the laughs in your comment.

Aaaah, yes. I love the whole soundtrack. Wow, love how you associate "Awarapan" with you.

Shreya is awesome! I love her voice. Love how she sang "Jadu Hai Nasha." "Chalo Tumko Lekar Chale" is lovely, love looking at it. Love the bubbles popping on John.

Hahaha! I thought it'll be funny to put that. I mean, I did make a lot of caps and put it on the post. ;P

Nicki,
Wow, so I'm going to have to pull this out and watch it, hey? I've owned it for over a year...thing is, it was on VHS and I heard it wasn't very good. I did try to make it through one day and lost interest about 20 mins in.

Sounds like I need to try again--I wasnt fully sold on Bollywood at that time, and anything with John and Bips is worth watching for eye candy alone! What was I thinking??

Sometimes, I see that Bips and John are together in real life, and I realize that two excessively sexy people may one day be the parents of beauties to rival Aishwarya and Abhishek's pre-destined brood. I am terrified (and a little aroused).

BB - I think JoBi is the equivalent to Brangelina. Not Abhiwarya. Plus Brangelina aren't married, they are a couple and not afraid to admit it, unlike Abhiwarya who suddenly out of no where decide to get married. That's just my opinion though. JoBi's babies are going to be hot, sexy ramp models and underrated actor/actress. Hehehe.

Hey, know what?
Recently I got comment on one of my post, by Neelesh Misra. Who has written Fabulous lyrics 'Jadu hai nasha hai'.

Check out his blog, its worth visit. http://rovingwriter.blogspot.com/

Darshit - wow, that is great news!!! Congrats. Thanks for the blog, I'm following. :)

Wow Nicki,
The movie is so racy! LOVE all the screen caps here! I got it from the library and watched it last night and found it had no subtitles, but my years now of watching Hindi movies allowed me to stumble on and follow the plot. Also, I knew first thing after viewing, I'd be able to get a recap at your blog, since the movie stars 2 of your favorites. :) Yet it was really nice NOT to have the subs so I could focus on John's handsomeness; who needs subtitles? They sometimes get in the way. I agreee with you here, "His earlier films, to me, showed more of his acting skills than his recent films." I also did NOT like the dubbing, could tell it was not Bips, but was John's voice dubbed too, I went back and forth on that and could not decide. Like Ajnabi said above, I really love him in the emotional roles, and most of all in Water. I'm glad I finally saw this film, and maybe I'll see it again with subtitles one day so I can be bother with that pesky dialog while I watch Mr. Abraham. ;)
All the best!
Sita-ji
p.s. I was very discrete and checked the DVD out of the library quite quickly so that no one could see the title, which most of you know is a naughty slang word in English.

Interesting post. I was watching the movie again after years and found your blog. Love the fact that you love Indian films.